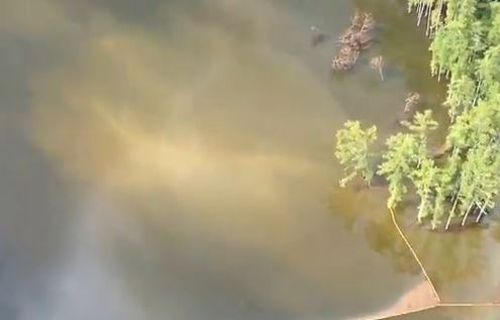 It’s been nearly a year since the sinkhole appeared near Bayou Corne in Assumption Parish, Louisiana. The sinkhole is now 22 acres and likely to grow more.

A salt dome cavern operated by Texas Brine Company collapsed, creating the sinkhole. It was expected that the collapsed cavern would fill in – or that the company would fill it in. However, over the past seven weeks, the floor of the cavern has subsided 350 feet, opening up more unfilled space in the cavern. It’s unclear why the cavern floor is sinking.

Hydrogen sulfide and methane have been detected in homes in Bayou Corne. It is also not known how much larger the sinkhole will get. An evacuation order has been issued due to safety concerns, but residents are not being forced to leave. Texas Brine Company has made offers on 92 homes in the affected area. Forty-four offers have been accepted.

With hydrocarbons bubbling up from the sinkhole and seismic activity continuing, it seems likely the sinkhole will grow. Here’s the latest flyover video of the sinkhole.