You are here: Home / News and Events / Mysterious Bubbling Sinkhole in Louisiana 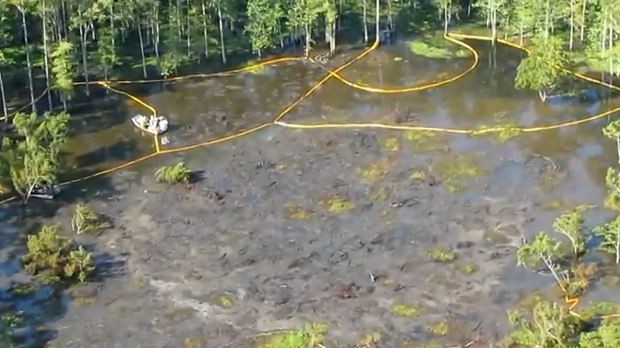 A mysterious bubbling sinkhole about fifty miles south of Baton Rouge, Louisiana has swallowed up full-grown cypress trees and bent a 36-inch natural gas pipeline. The sinkhole was discovered August 3 and has since grown to 370 feet wide by 420 feet deep.

Governor Bobby Jindal declared a state of emergency for Assumption Parish, followed by a mandatory evacuation notice. About half of those told to leave had left. If the sinkhole continues opening or evidence of a possible explosion is found, the mandatory evacuation might become a forced evacuation.

The sinkhole opened up about two hundred feet from an abandoned cavern owned by Texas Brine Company. Texas Brine Company mines salt caverns and domes to obtain brine, which is simply salt water, used to manufacture chlorine and caustic soda for industry. Current speculation by the Louisiana Department of Natural Resources is that part of the abandoned cavern collapsed, causing the sinkhole, but more investigation is needed to be certain.

Natural gas had been bubbling up through local bayous for several months and tremors were reported in the area shortly before the sinkhole was found. Initially, there were concerns that naturally-occurring radioactive materials disturbed by oil and gas drilling in the area might be bubbling up through the sinkhole. Preliminary tests on the water in the sinkhole show oil and diesel on the surface, but no radioactive materials.

What Is a Salt Dome?

Salt domes are natural features formed by the slow evaporation of ancient seas. Salt is deposited, then buried by other sediments over time. Surrounding sediments will compact, but the salt will flow upwards through faults and eventually form mushroom-like shapes and domes. Salt domes are found in East Texas and Louisiana.

A nearby salt dome storage cavern used by Chevron to store natural gas is being emptied as a precaution. The gas will be put on the market ahead of winter. Often, natural gas or other chemicals are stored in salt domes and then removed and sold when prices hit a certain point.

Determining the Cause of the Sinkhole

The Louisiana Department of Natural Resources has asked Texas Brine Company to drill to find the cause of the sinkhole. The company is also responsible for damages, according to their original permit, and has said they will set up a relief fund for people who have to evacuate. Texas Brine Company expects the drilling equipment to start arriving later today. The drill should reach the cavern and begin to get some answers in about six weeks.

The video below shows a flyover of the sinkhole and the area around it so you can get a sense of the scale. The small green tufts in the middle of the sinkhole are the tops of cypress trees. The only sound on the video is that of the helicopter, so go ahead and mute it, if you prefer.