You are here: Home / Availability / Are We Running Out of Water? 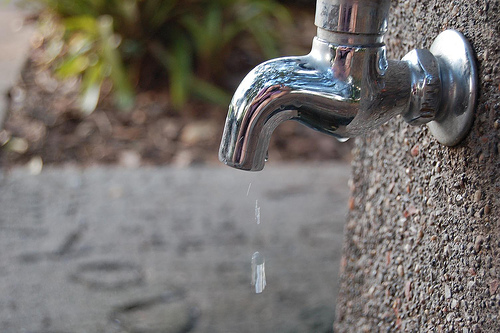 As our world’s population surpasses 7 billion, we are beginning to use fresh water faster than our rate of population growth.

According to a recent report from Reuters:

Water use is predicted to increase by 50 percent between 2007 and 2025 in developing countries and 18 percent in developed ones, with much of the increased use in the poorest countries with more and more people moving from rural areas to cities,

Only 2.5 percent of the Earth’s water is fresh water, and half of that fresh water is frozen, which means that while the Earth has a lot of water, it doesn’t have a lot of drinking water. In many areas, people are already coping with limited access to water, and that’s only going to increase as our population rises and we use more of this precious resource.

Rob Renner from the Water Research Foundation has identified a few “water risk hot spots,” which you can view on Aquaduct’s handy interactive map.

Are water shortages our future? They could be, if we don’t reprioritize how we use our water resources now. In fact, water shortages are already affecting businesses around the world. If we don’t change our processes to be more water-efficient, we’re in some serious trouble. It might sound dire, but it’s doable!