You are here: Home / Blue Energy / Toshiba to Get Energy From the Ocean 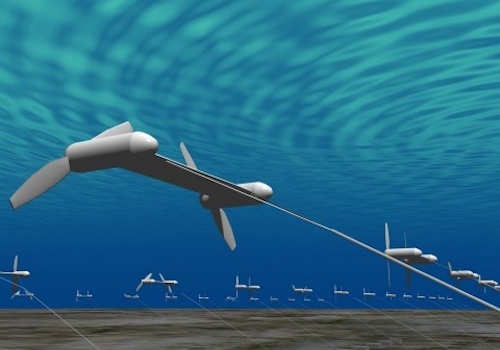 The well known Japanese company Toshiba and its perhaps not as well known co-patriate IHI have been tapped to pilot a new ocean energy project that will deploy a phalanx of underwater turbines that float like kites. The project demonstrates once again how legacy companies are transitioning to new clean tech. At a little less than 100 years old Toshiba is a baby compared to IHI, which traces its roots back to 1853.

We’ve been bringing up the point about legacy companies lately (here and here, for example), because it underscores just how out of step the fossil energy sector is. Energy is a fungible technology, too, right?

Ocean energy turbines have been trickling into the global marketplace and Japan has an ocean energy ace up its sleeve: the Kuroshio Current.

One of the two largest of the world’s seven major currents, the Kuroshio Current lies right off the coast of Japan. According to our friends over at the US Navy, the current travels at a speed of up to 3 miles per hour. That might not sound particularly speedy, but it’s more than enough to power an underwater turbine.

Another thing to consider is the predictability of the tidal currents around the project, which varies little throughout the year.

Back in 2012, The Japan Times also took note of how much control the country has over its maritime assets for ocean energy potential. Its offshore exclusive economic zone adds up to 4.47 million square kilometers, making it the sixth-largest exclusive zone in the world.

This is actually the latest step in a NEDO-funded project that began back in 2011, involving Toshiba and IHI with the University of Tokyo and Mitsui Global Strategic Studies Institute in ocean energy research.

IHI has been leveraging its generations-long experience in energy and marine engineering to manufacture the device, which consists of two counter-rotating turbines that nest in a floating box. The box is anchored to the sea floor and floats, kite-like, at a strategic point in the current.

Similarly, Toshiba’s contribution to the project represents its expertise on the electricity generating side.

There doesn’t seem to be a timeline for deploying the device but for now we’ll guess it will be up and running by 2017, when the project is expected to wrap.

Ocean Energy in the USA

Here in the US, ocean energy strategy has been focusing on mainly on waves rather than currents. Among other projects we’ve been following the aptly named Ocean Power Technologies company, which has been working with the US Navy to deploy a wave energy harvesting device.

The Navy has also recently upgraded its wave energy test site in Hawaii. Last time we checked in, a deal was in the works to test run another device called StingRAY, engineered by the company  Columbia Power Technologies.