You are here: Home / Agriculture / In Japan, They’re Farming With 99% Less Water 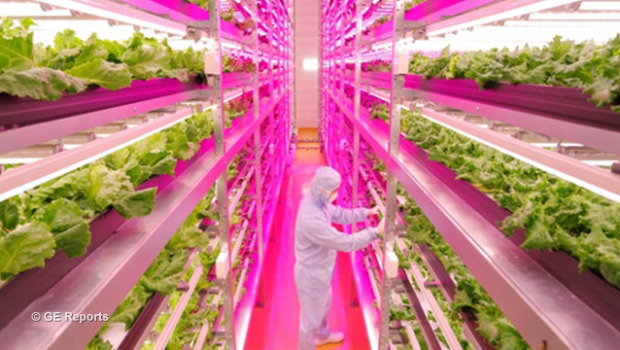 
This hydroponic farm in Japan cuts water usage by 99%! The farm occupies an abandoned Sony chip manufacturing facility in Miyagi prefecture, near where the earthquake and tsunami struck the country in 2011. It is the brainchild of Shigeharu Shimamura, a plant physiologist who was inspired by a vegetable factory he saw at the Expo ’85 World’s Fair in Tsukuba, Japan. Shimamura used his passion to start his own aquaculture company called Mirai in 2005. The name means “future” in Japanese.

Shimamura’s newest venture occupies 25,000 square feet of floor space in the abandoned factory. It opened in July, 2014 and is already producing 10,000 heads of lettuce a day. Key to its success has been cooperation from General Electric, which has created custom crafted, moisture resistant LED grow lights that mimic the precise wavelengths needed to stimulate plant growth. They are also thin enough to allow Shimamura to stack his growing racks 15 levels high.

The new, energy-efficient GE lights use 40% less electricity than conventional fluorescent bulbs, and – like other aquaponic farms in Japan – are computer controlled to allow the plants periods of darkness during each growing day. These rest periods are essential to the rapid growth of healthy plants.

Shimamura says his hydroponic farm cuts water usage by 99% compared to a regular hydroponic farm. Stacking the growing trays allows the operation to produce 100 times more lettuce per square foot of floor space than an ordinary outdoor farm.  He also says his plants are packed with vitamins and other nutrients as a result of his careful management system. Experts predict the world’s population will increase to over 9 billion by 2050- and they’ll need food! Shimamura believes his hydroponic factory will play an essential role in feeding all those people.