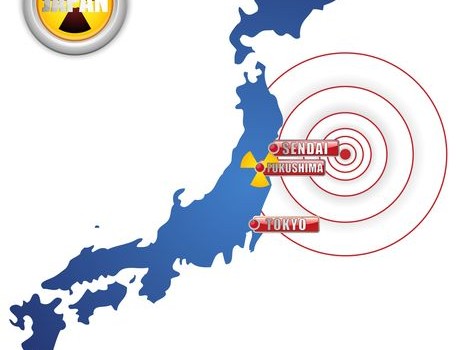 
A 7.3 magnitude earthquake hit Japan today 26 Oct 2013 at 3:10 a.m. local time, sending a small tsunami to the coast. To make matters worse, two typhoons are headed for Japan this weekend. After the recent heavy rains, radioactive water is sure to keep washing into the ocean.

The 7.3 magnitude earthquake occurred in the ocean off the island of Honshu, about 230 miles east of Fukushima. The USGS says it was 6.2 miles deep. People in Tokyo felt the effects.

No initial reports of damage or injuries have been reported. The Fukushima nuclear plant, which was severely damaged by an earthquake and tsunami in March 2011, reported no damages, although the Tokyo Electric Power Company (TEPCO) ordered some employees to evacuate to higher ground.

The earthquake which struck Japan in March 2011 was a 9.0 magnitude quake and it resulted in significant damage to buildings. The tsunami that followed wiped out entire towns and the Fukushima nuclear plant still hasn’t recovered. By comparison, while today’s earthquake was felt three hundred miles away, it doesn’t seem to have produced significant damage and the tsunami was only one foot high.

To be clear, twelve inches of ocean rushing through a town can drown people and move cars around, so it still matters. It just won’t have the same effect as the tsunami from March 2011, which killed about 19,000 people.  In the case of today’s tsunami, it appears that the water didn’t make it over the levees.

Typhoons Francisco and Lekima are expected to pour more water on the area this weekend.