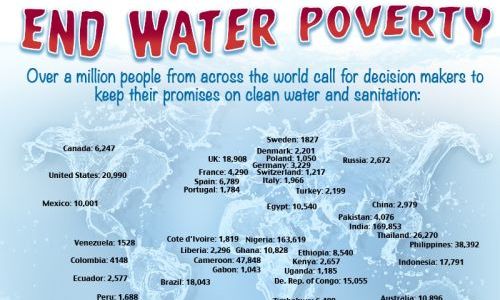 It’s within our reach to end water poverty. What would it take?

Water poverty is a catchall term used to refer to a lack of access to clean water for drinking, washing, and bathing, and it includes a lack of access to proper sanitation. The United Nations set the millennium development goals (MDGs) and the success of each MDG depends on WASH (Water Sanitation Hygiene).

Eight of those MDGs are:

One MDG was met in 2012.  The goal was to halve the proportion of people with no access to clean drinking water by the year 2015.  It goes to show what people can do when we join together in a common cause.

Water poverty has a significant impact on the global economy – an estimated $260 billion each year – through direct and indirect effects. Direct effects can include water borne illnesses that take people out of the workforce temporarily or permanently, water too saline for crops to grow, and people (mostly women) spending much of the day hauling water from a source to their home.

The surprising fact is that it would take only $32.2 billion to solve these problems. Quadrupling an initial investment is a fantastic rate of return.

The infographic below goes into more detail about the problem of water poverty.