You are here: Home / Marine Life / New Island Forms Off Coast of Pakistan 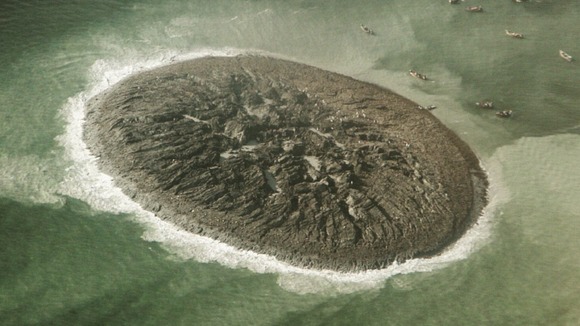 A new island formed off the coast of Pakistan in the Arabian Sea last week. The island showed up suddenly after a 7.7 magnitude earthquake hit Pakistan.

Scientists said the island likely formed from a mud volcano – a mixture of mud and sand pushed up through the water because of gases released by shifting pressures from the earthquake. It lies about a half mile off the coast of Baluchistan province in the Arabian Sea. It is about 250-300 feet across, 100 feet wide, and 60-70 feet above sea level.

Locals rushed to the island in small boats, although officials warned of gas on the island. Bubbles in the water around the island are caused by gas being released in large enough quantities that lighting a cigarette can cause a flash. The gas is also probably responsible for a fish kill around the island.

While it’s not very small, it probably won’t last long. The pressures exerted by the earthquake will release, the mud will settle, and the wind and ocean waves will erode what’s left of the little island. Previous earthquake islands that showed up after the 1999 and 2010 earthquakes in Pakistan lasted less than one year. Pakistan experiences a stormy monsoon season each summer which can erode the flimsy islands quickly.

Photo of new island by National Institute of Oceanography, Ministry of Science and Technology, Government of Pakistan