You are here: Home / Marine Life / What Is a Dead Zone? 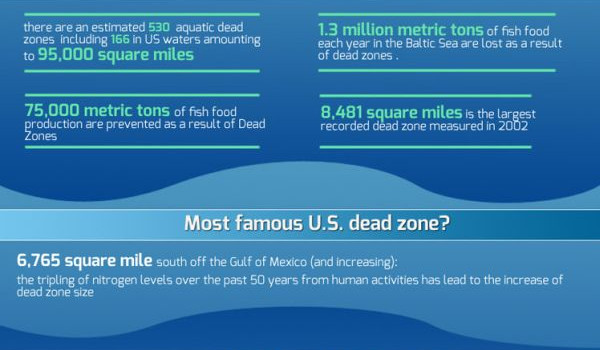 
The USGS recently announced they are monitoring nitrates in real time to help study dead zones. What is a dead zone and why does it matter?

A dead zone is an area of a water body that contains very low dissolved oxygen. The water body might be as small as a lake or as large as an ocean.

Dead zones can occur naturally, but most of the dead zones in the world’s oceans and lakes in the past several decades have been a result of human activities. The map on the infographic below shows a satellite-based map of the ocean’s dead zones. Notice that the dead zones are concentrated on the east coast of North America, the west and north side of Europe, and eastern Asia off China and Japan. Some spots also show up on the west coast of North America, but not to the same broad extent.

Dissolved oxygen decreases when something uses up the oxygen in the water faster than it can be replaced. Nitrate monitoring is important because it is nitrates in agricultural runoff that cause the regular appearance of many dead zones. Other sources of pollutants that contribute to dead zones are sewage, industrial emissions, and vehicular emissions.

Dead zones affect fisheries, water treatment plants, and recreational activities, costing the economy money. According to the infographic below, 1.3 million metric tons of fish food is lost annually in the Baltic Sea alone because of dead zones.

Check out the infographic for more facts and figures.

The Death of an Ocean infographic created by DistanceLearning.com.