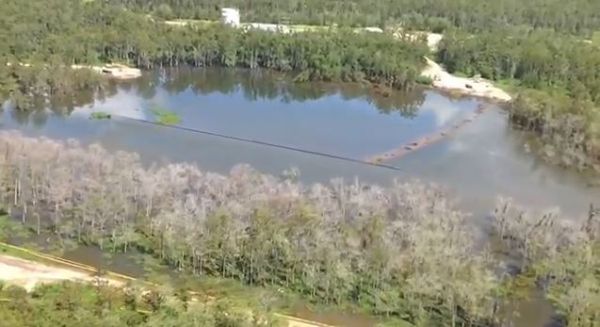 Seismic monitoring picked up signs of a collapse in the Oxy3 cavern, so it was no surprise when trees started sinking.  When debris falls into the sinkhole, often crude oil and natural gas come to the surface of the waters.  That’s the reason for the yellow booms floating on the water that you see in the videos.

The most spectacular video is of several trees suddenly disappearing into the swamp, taken 21 Aug 2013.

In this video taken the morning of 22 Aug 2013, a single tree is pulled under.  It looks like it’s falling over into the mud, but then it stands straight up right before being sucked under.

The latest flyover shows the widening sinkhole, although it hasn’t moved closer to the local towns or the highway.