You are here: Home / Rainfall/Precipitation / Washed Away – Book Review 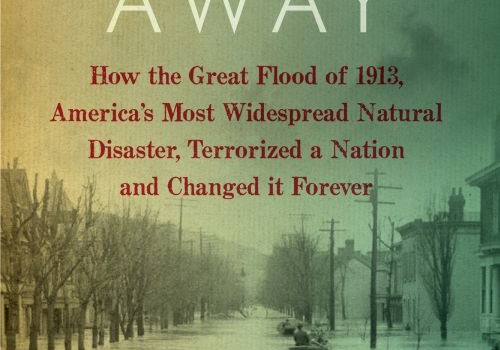 In 1913, a large storm hit the midwestern U.S. The resulting tornadoes, rains, and floods produced one of the largest natural disasters in the nation’s history and changed the way the country approaches disaster preparation.

At the beginning of the twentieth century, most towns and cities had some sort of plan for natural disasters. Flooding was typically restricted to certain areas and when rains fell, the people in those areas simply moved to higher ground and stayed in community halls or other shelters temporarily. However, the Great Flood of 1913 happened overnight in many areas. It spread further and reached higher ground than historically known.

Communications were limited at the time. The flood washed out telegraph and telephone lines and communities downriver didn’t know what was happening to nearby towns until it hit them. Washed Away tells the stories of the individuals affected and makes a long ago flood seem immediate and present. Of the millions of people affected, author Geoff Williams has chosen a hundred or so people and told their stories in dramatic, gripping detail.

The resulting destruction of the flood wiped out such a huge swath of the Midwest that local, state, and national governments realized there had to be a coordinated effort in the future. The Great Flood of 1913 had a large impact on national disaster policies.

Washed Away: How the Great Flood of 1913, America’s Most Widespread Natural Disaster, Terrorized a Nation and Changed It Forever

is available on Amazon for about $20.