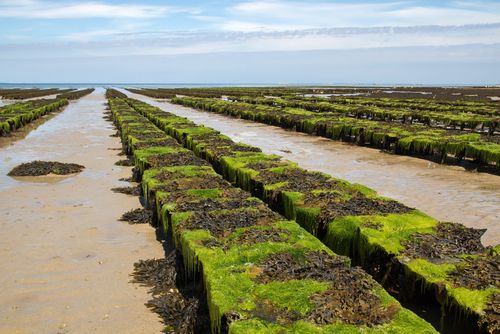 The first effects of climate change are being felt by those people dependent on the oceans for their livelihoods (and the insurance industry). Oyster fisheries have hit upon a temporary measure to respond to ocean acidification.

Oyster fisheries “seed” each generation of oysters in hatcheries on land that pull water in from a local estuary. When oysters hatch, the larvae spend the last bit of their energy from the egg building a protective shell around themselves. Calcium carbonate makes up the shell of the oyster and that calcium carbonate must be precipitated out of the ocean water by the oyster.

The oyster industry in the United States was worth $117 million in 2010. While pollution and both manmade and natural disasters have taken their toll on the industry in recent years, interest is growing in establishing more oyster farms. Oysters and other shellfish also help to clean the waters of bays and estuaries. They circulate and filter the water, removing pollutants and excess algae. Some shellfish can even be used as a warning that an area is becoming too polluted.

The acidification of the ocean has had such a dramatic effect on shellfish that by 2009, survival rates at oyster hatcheries had declined by 60-80%. In order to keep their businesses going, oyster farmers started adding sodium carbonate to the hatchery waters. The result is to make the water less acidic and to free up calcium ions for the oyster larvae to build their shells with.

The amount of sodium carbonate being used in oyster hatcheries is small compared to the size of the ocean. Even though the water from the hatcheries is returned to the estuary where it was drawn from, the sodium carbonate will have little effect on the larger ecosystem. Climate change will continue to make the oceans more acidic as time goes by. This is problem for many shellfish that grow wild and can’t rely on humans taking care of their young in hatcheries.

Oyster beds off Jersey in the UK photo via Shutterstock