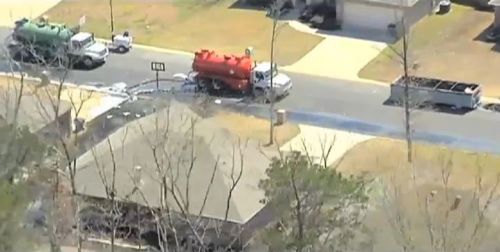 On March 29, 2013, a pipeline in Mayflower, Arkansas ruptured, spilling tar sands oil throughout the streets.  The heavy bitumen soaked into the soil and made its way into local waterways.  Six weeks later, ExxonMobil is not making much headway in cleaning up the spill.

Twenty-two families had to leave their homes due to the toxic nature of the tar sands oil.  They still have not been able to return to their homes.  Cleanup crews have removed tons of oil-soaked soil, concrete, asphalt, plants, and other debris and stored the waste at a site near Conway, Arkansas.

The state of Arkansas filed suit against ExxonMobil for violations of the Arkansas Hazardous Waste Management Act and the Arkansas Water and Air Pollution Control Act, as well as improper storage of hazardous waste.  The waste being stored near Conway, Arkansas was supposed to have been removed from the storage site by May 8, but it’s still there.

The U.S. EPA joined the suit with the state of Arkansas.  The heavy tar sands oil sinks to the bottom of lakes and streams, instead of floating on top like most oil.  This increases the difficulty of cleaning up after a spill.  The EPA is suing under the Clean Water Act.

The video below shows aerial footage of the oil spill in Mayflower, Arkansas.