You are here: Home / Health / Poop in Public Pools 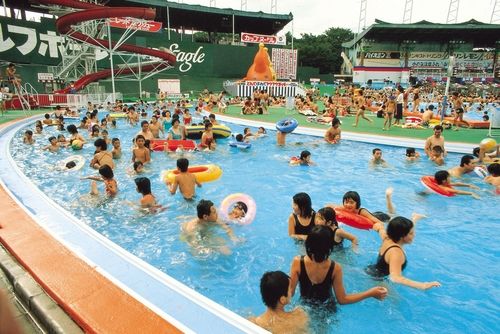 Or, rather, don’t poop in public pools. Please. The microscopic flora in many pools is unpleasant to think about.

A group of researchers took samples from the filters of 161 public and private swimming pools and water parks in Atlanta, Georgia during the summer of 2012. Public swimming pools are usually owned by cities and are open to anyone who lives within city limits or who pays a small fee. The private pools in this study were club-owned pools, rather than the pools in somebody’s backyard. The swimmers at private pools are still a varied group.

The study tested for Pseudomonas aeruginosa, Escherichia coli, Giardia intestinalis, Cryptosporidium, Noroviruses, and Adenovirus. All these viruses are associated with diarrheal illness in infected patients.

The good news is that neither norovirus nor adenovirus were detected in these pools. That doesn’t they’re absent from all pools, but that maybe they aren’t very common. E. coli and P. aeruginosa were found in 58% and 59% of pools studied, respectively, with 42% of pools containing both microbes. Giardia was found in two pools and cryptosporidium was found in only one.

E. coli is a common bacteria found in the intestinal tracts of most mammals. However, outside of the intestinal tract, such as if it is ingested through contaminated food or water (pool water, for instance), it can cause severe diarrheal illness. E. coli was found in 70% of the public pools and 66% of the water parks. Only 49% of the private pools contained e. coli.

While cryptosporidium was found in only one pool, it doesn’t take much to start an outbreak. It takes 2-10 days after exposure for symptoms to begin. By that time, an infected person might have gone swimming in more than one pool. In the Dallas-Fort Worth Metroplex in 2008, an outbreak of crypto shut down nearly all water parks and public pools. It started in one swimming hole in the early summer. By mid-summer, at least 400 people had fallen ill with severe diarrhea.

On a positive note, proper chlorination of pool water can kill these microbes. E. coli can be killed within a minute with a chlorine concentration of 1 part per million. Cryptosporidium takes up to ten days to die off – if crypto is suspected, it’s best to hyperchlorinate to rid the water of the microbe.

The microbes get into the pool through leaky diapers or inadequate cleansing after using a toilet. The CDC recommends showering with soap before swimming and taking a rinse shower after a bathroom break. Take small children out of the pool every hour or so and encourage them to use the toilet. Wash your hands well. Don’t swim when you have diarrhea.

Have fun swimming this summer, but do take precautions and stay safe and healthy.