You are here: Home / Infrastructure / Route Map of the Keystone XL Pipeline 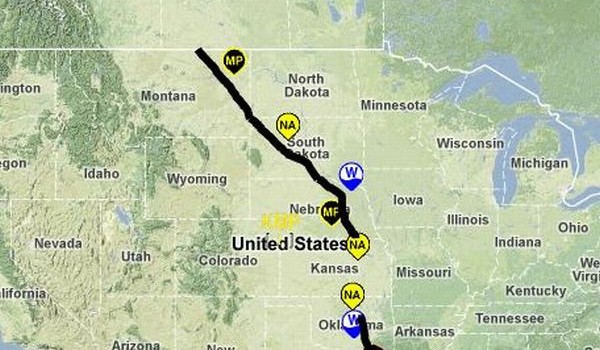 When photographer Thomas Bachand decided to document the route of the Keystone XL pipeline, he went looking for a map of the project. He soon found out there isn’t one, so he made his own.

The Keystone XL pipeline will carry bitumen from the tar sands of Alberta, Canada, through a corner of Saskatchewan, then across the United States through Montana, South Dakota, Nebraska, Kansas, Oklahoma, to refineries on the Gulf Coast in Texas. The fight has been on for a few years already to prevent the pipeline from crossing over major aquifers and other water bodies that must support local populations. So why isn’t the exact location of the proposed pipeline available to the public?

It sort of is. Thomas Bachand began his project by asking the U.S. Department of State and TransCanada, the company building the pipeline, for detailed route information. Neither party would release the data. TransCanada cited national security reasons for their lack of cooperation.

Even without their cooperation, some of the information is publicly available. The Montana Department of Environmental Quality has mapped the section of pipeline that runs through their state. The use of eminent domain by TransCanada to seize private property must be registered with various authorities.

After consulting several sources, Bachand pieced together much of the route, although there is still quite a bit of data missing. He posted a route map of the Keystone XL pipeline online and will be updating it as he gets more information.