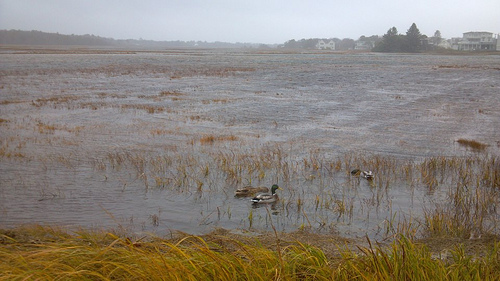 Hurricane Sandy was a thousand miles wide when it made landfall in New Jersey Monday evening. The storm wreaked havoc on several states, combining with two other weather systems to produce flooding, storm surges, wind damage, and blizzards.

The image at top shows a road in West Virginia after four employees of the U.S. Fish and Wildlife Service spent an hour clearing it of debris and fallen trees.

The storm is blamed for sixteen deaths so far, but there may be more discovered as emergency crews investigate fallen structures and floods recede.

The image below shows the storm surge on Chincoteague Island in Virginia as Hurricane Sandy was preparing to make landfall further north.  Reports are that the wild ponies on the island are okay – good to hear for those of us who grew up reading Misty of Chincoteague

.  Before the storm, the fire department went through the island opening all gates to ensure the ponies could move away from the wind and water.

The below photo shows mallards preparing to weather the storm in Rachel Carson National Wildlife Refuge in Maine.  It looks like a lake, but it’s really already flooded marsh.

New York experienced a lot of flooding.  The storm surge reached thirteen feet in some places.  This photo is of the East Village, just before the ConEd substation exploded and the power went off.  8.2 million homes are still without power; 2 million of those are in New York City.  Power in some places may take up to a week to restore.

Boats washed ashore and ended up on the railroad tracks.

The Metropolitan Transit Authority released this video of the subway in New York City.  Several tunnels are entirely flooded.

As many as one hundred homes burned in Queens while Hurricane Sandy blew in.  I was unable to find out if anyone was hurt in the fire.  The residents might have evacuated or moved to shelters before the storm.

Storm damages are estimated to cost about $20 billion.  More on the storm on sister site, PlanetSave