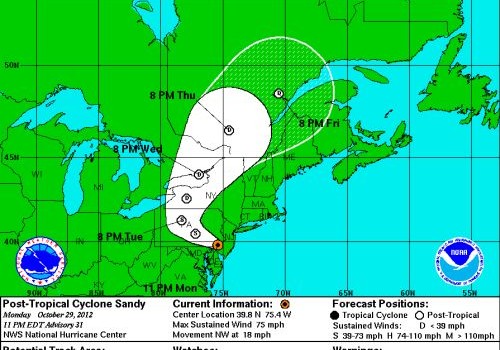 Hurricane Sandy’s name was changed to Superstorm Sandy because the temperatures dropped. However, the winds are just as fast and the floods and storm surges are expected to continue through Tuesday evening.

It sounds odd to change the storm from “hurricane” to “superstorm”, since the storm itself hasn’t changed in intensity. It’s still spinning with winds from sixty to eighty miles per hour. The difference is the temperature of the core of the hurricane. That temperature has dropped.

Hurricane Sandy made landfall at 8 p.m. Eastern near Atlantic City in New Jersey. Part of Atlantic City’s boardwalk washed away earlier on Monday.  The current predicted path shows Sandy moving through Pennsylvania, then turning northeast through Canada.  Earlier predictions showed Sandy turning all the way back to Nova Scotia, but it might not last that long as a concentrated storm.

Expect coastal flooding to continue until late Tuesday. Be safe about leaving your home for another day.

As the hurricane came into shore, a large cold weather system and another system coming down from the Arctic met the hurricane. The rain turned to snow in some places and blizzards in other places. Fourteen inches of snow fell in Tucker County, West Virginia.

Nearly five million people are without power as of Monday night. This video, courtesy of TrillianMedia, shows an explosion at a ConEd plant that shut down power to Manhattan below 39th street.

The full effects of this storm won’t be known for a few days.  Dollar estimates of damage are already in the billions.