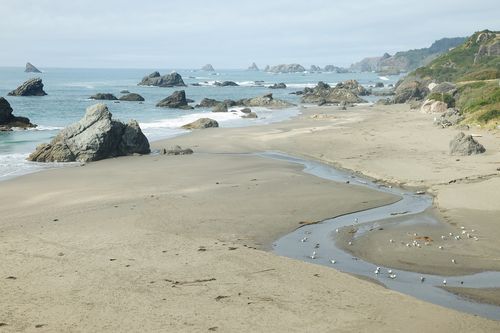 Caffeine pollution? Yep, it exists. The Pacific waters off the Oregon coast are caffeinated.

Researchers at Portland State University measured the amount of caffeine in both marine and freshwater locations in Oregon. Caffeine was chosen because it is a good indicator of human wastewater sources. Caffeine is produced by many plants – coffee, tea, and cola plants, for instance – but none that grow in the northwest United States.

Surprisingly, the study did not find higher concentrations of caffeine in waters near major population centers. Caffeine levels rose after heavy rains and seem to be associated with sewer overflows and septic systems, rather than wastewater treatment plants.  Septic systems are not inspected often once they are installed.

The highest amount of caffeine in the ocean was 44.7 nanograms per liter, well below the lethal dose for marine life. In a previous study, intertidal mussels exhibited stress at 50 ng/l.

In rivers and estuaries draining to the ocean, the highest amount was 152.2 ng/l.

Caffeine in the marine and freshwater ecosystems doesn’t seem to be a big problem at these levels, although it’s not good. The existence of caffeine in the water indicates that other pollutants may also be finding their way from human sources into the Oregon coastal waters.

The research team is planning on studying septic tanks in coastal areas in order identify the extent to which these systems are contaminating the Pacific.