You are here: Home / Climate Change / 2012 – The Sixth Most Severe Drought in United States History 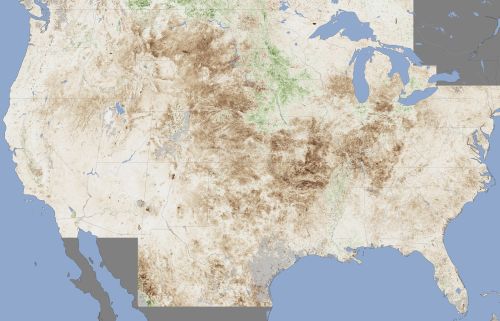 The current drought is the sixth most severe drought in the United States. The drought is affecting vegetation, including crops.

The map above shows “vegetation anomaly” for Jun 25-Jul 10, 2012, compared with the same dates between 2002 and 2012. The darker the brown, the less vegetation coverage compared to prior years. Green areas indicate lusher vegetation.

The central part of the United States has been the hardest hit. Crop yields are expected to be lower this year than last. A warm spring prompted many farmers to plant earlier and more than usual. Now many crops look like they will be a loss. The USDA fast track drought designations are helping to make aid available to those farmers who stand to lose because of this drought.

The current drought is a result of several weather patterns coming together to push the jet stream further north this year, taking with it the rain that crops need.