You are here: Home / Drinking Water / LifeStraw upgraded, available for retail sale in U.S. and Canada 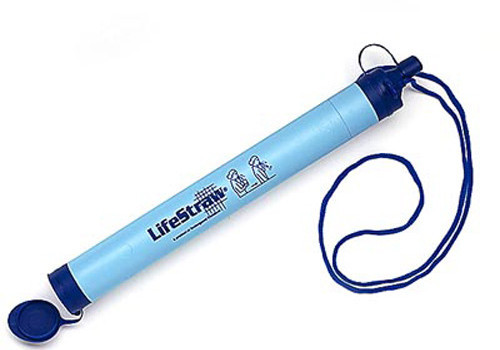 The award-winning LifeStraw® personal water filter is now available to consumers in the U.S. and Canada for the first time. The portable filter—used since 2005 amid harsh conditions in developing countries—removes bacteria and parasites from water, and is ideal for outdoor activities, overseas travel, and emergency preparedness.

LifeStraw enables users to drink water safely from contaminated water sources. Several advancements have been made to the original design, and the LifeStraw Personal Water Filter now features:

The video below talks a bit more about the LifeStraw and demonstrates its use.

LifeStraw® is an elegantly simple but technologically advanced innovation. The filtering tube measures about nine inches long and one inch in diameter, and weighs less than two ounces. Designed for rugged use, the filter is made of durable plastic, is chemical-free, and does not
require electrical power, batteries or replacement parts; it is powered by user-generated suction.

Anyone who can use a drinking straw can use a LifeStraw®; the user simply draws unfiltered water through the LifeStraw®, and blows air back through the straw to flush and clear it after drinking.

“Because LifeStraw® takes up virtually no space in a camper’s backpack or a traveller’s luggage, it offers easy access to safe drinking water when they’re away from home,” explained Paul Chen, North American regional director for Vestergaard Frandsen Inc., maker of LifeStraw®. “We also encourage families to consider including LifeStraw® in their disaster preparedness kits as safe drinking water can be hard to find in an emergency,” he added.

Disasters including earthquakes, hurricanes, tornadoes and floods often result in limited or compromised access to water systems. When water contaminated with bacteria or parasites is consumed, the outcome can range from gastrointestinal discomfort to serious diarrheal illness or even life-threatening disease.

Swiss-based Vestergaard Frandsen is a global leader in the development of disease control technologies. The company originally introduced LifeStraw® as an emergency response tool but also found practical applications for non-emergency needs in developing countries. In 2010,
Vestergaard Frandsen distributed thousands of LifeStraw® personal water filters to victims of the Haiti earthquake and Pakistan floods.

LifeStraw® has received accolades from media and the business community. In 2008, it won the Saatchi & Saatchi Award for “World Changing Ideas.” Time named LifeStraw® the “Best Invention of 2005.” Esquire called it “Innovation of the Year.” Forbes praised LifeStraw® as “one of the ten things that will change the way we live.”

Consumers in the U.S. and Canada can purchase LifeStraw® at Eartheasy.com (www.eartheasy.com/lifestraw) for $19.95.

Retail businesses and volume accounts can purchase LifeStraw® at wholesale through Eartheasy.com, which is the master distributor for USA/Canada. Wholesale inquiries should be directed to info@eartheasy.com or by calling 888-451-6752

In celebration of the U.S. retail launch, Eartheasy will donate one LifeStraw® for every ten sold; donated product will be distributed to crisis-affected people in developing countries through Vestergaard Frandsen’s partnership with Rotary International’s Rotary 1090 Foundation.

See the LifeStraw® program in action in the award-winning documentary “Carbon for Water” which is currently being shown in film festivals throughout North America.

Watch the trailer for Carbon for Water