You are here: Home / Politics / Before the Clean Water Act: 1970s Photos from the EPA 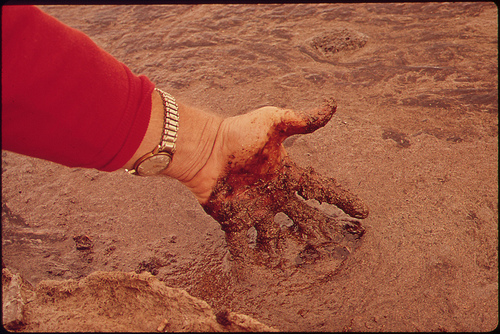 The current mood in Congress has put the Environmental Protection Agency (EPA) in the crosshairs.  Several people in Congress and the Republican presidential candidates have stated that they would remove the power of the EPA to control pollution by doing away with the Clean Air and Water Acts; some would just get rid of the EPA altogether.

In 1972, the EPA sent freelance photographers out across the nation to document the state of the environment.  The EPA was only a year old at the time and hadn’t had much of a chance to change things.

Some of the photographs document natural spaces with breathtaking beauty; some show horrible pollution of our nation’s cities and wild spaces.

The photo above had the following caption originally:  In October, 1972, a Pipeline of the Texas – New Mexico Pipeline Company Burst, Releasing an Estimated 285,000 Gallons of Crude Oil Into the San Juan River. beside the Company, Five Government Agencies Were Involved in the Clean – Up. Here, an EPA Official Takes a Sample of Oil – Drenched Mud from the Clean – Up Site, a Log Boom in Monument Valley, Utah, 10/1972.  Photographer:  David Hiser.

The photo below shows the same spill.

Original caption:  In October, 1972, a Pipeline of the Texas – New Mexico Pipeline Company Burst, Releasing 285,000 Gallons of Crude Oil Into the San Juan River near Shiprock, New Mexico. before Flood Conditions Caused the Oil and Debris to Spill over Into Nearby Lake Powell They Were Contained by Log Boom on the Utah Side of the Border This View Shows the Boom Site, with Clean – Up Equipment in Monument Valley, Utah, 10/1972.  Photographer:  David Hiser.

Photographer Charles Steinhacker seems to have traveled the entire length of the Androscoggin River (New Hampshire and Maine) and documented both lovely views and extensive pollution by the factories along the river.

Photo below original caption:  Details of Polluted Androscoggin River Seen from the Bridge at Jay Below the Androscoggin Mill of the International Paper Company 06/1973.  Photographer:  Charles Steinhacker.

Photo below original caption:  After Spawning the Salmon Dies. Here She Lies in the Gravel Stream Bed of the Gulkana River 08/1973.  Photographer:  David Cowals.

The Gulkana River in Alaska still has a population of spawning salmon.

Photo left original caption:  Detroit Lake Shown at an Alltime Low in the Fall of 1973 Due to Sparse Snowfall and Rain the Year Before. Normally It Is Used for Water Sports and Camping, and as a Reservoir for Winter Powerplant Use to Feed Mid-Willamette Valley Cities 09/1973.  Photographer:  David Falconer.

There are still a lot of open quarries like this in Texas. Many are within sight of major highways. Lake Buchanan has been heavily developed in the last forty years, so there probably aren’t any quarries so close to the lake any more.

Original caption:  View Toward Twenty-Seven Mile Glacier, Showing the Highway and Ptarmigan Lake. The Pipeline Will Be Routed Diagonally Across This Picture, From Upper Left to Lower Right (South to North) Across Rocky Benches and Moraines Roughly Parallel to the Roadway. Mile 759-760, Alaska Pipeline Route 08/1974.  Photographer:  Dennis Cowals.

Dennis Cowals took a series of photos of the path of the Trans-Alaska Pipeline.  This is one of them.

The original caption on the photo to the right is simply “South Central Texas”. The photographer is Bill Reaves.

South central Texas is full of caves and sinkholes and is a very lovely place to vacation if you like the outdoors. I don’t know if this place is still around. The rock in the area is very soft and it may have eroded away by now.

There are thousands more photos of every topic imaginable. Besides these photos of rivers and lakes, I looked up places I’ve lived to see how they changed. It’s a fascinating collection and it’s easy to spend too much time there.

In honor of the fortieth anniversary of the Documerica photo collection, the EPA has put out a global call for photographers to document their environment and send those photos in to the EPA.

Spend some time on the site browsing photos and consider sending in your own photos.