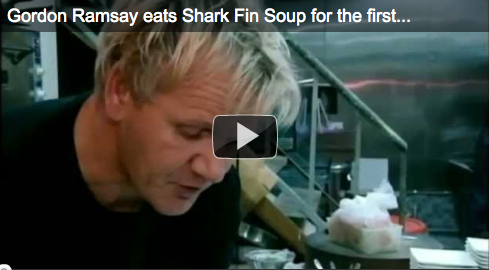 
Gordon Ramsay doesn’t tread water lightly when it comes to criticizing failing chefs on his T.V. show “Kitchen Nightmares” or on “Hell’s Kitchen”. He criticizes and is straight forward, to the point, in-your-face honest about what they are doing wrong.

So when he tried Shark’s Fin soup for the first time, he decided to video tape it and tell the world about it.

Without Ramsay’s expletives, here are some shark facts, according to SharkSavers.org,

No matter how difficult it is monitor it, we should get more countries involved in banning shark finning. If we don’t try, we are just as guilty as those who practice it. Or eat it.