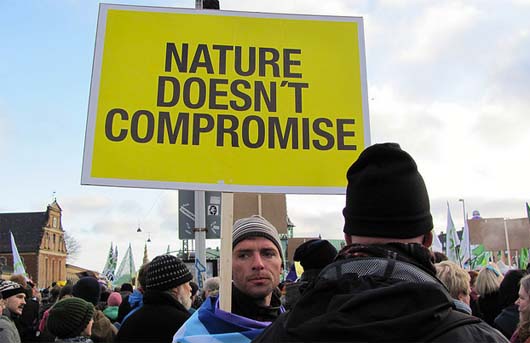 As a result of the record high temperatures engulfing the South (and much of the planet) the Tennessee Valley Authority has had to shut down its largest nuclear power plant for the 40th day since  July 8th, the TimesFreePress reports. The Tennessee River in Alabama is just much too hot.

The river water rose to a record 90 degrees Fahrenheit during the heat wave that hit the East Coast this August. This violates the permit TVA has with the Alabama Department of Environmental Management.

Any possible non-nuclear-effluent cause for 90 degree river water near nuclear reactors was not within the scope of the original licensing and permitting.

Global warming was not on the utility’s radar when the Browns Ferry nuclear reactor was refurbished in the ’90s. Ashok Bhatnagar, a TVA senior vice president, said the utility had thought of adding more cooling towers or a closed-loop cooling system, but at that time they assumed that the chance of exceeding a 90 degree temperature limit in the Tennessee River was slim.

The nuclear plant losses amount to $50 million just this year. If the river stays hot, the TVA stands to lose millions more due to the idled power plant. These financial losses are simply passed on to ratepayers in the states the TVA supplies.

Power charges paid by ratepayers have already gone up seven times in seven consecutive months to try to keep abreast of the enormous losses. The monthly fuel cost adjustment for TVA ratepayers is up by more than 25% since March.

As the climate goes on heating, nuclear power is likely to face more expensive shut downs like the 40 idled days within the last two months.

Will the good people in Tennessee and parts of Mississippi, Kentucky, Alabama, Georgia, North Carolina and Virginia just have to keep bearing these ever-increasing costs?

Scientists predict that by 2100, average temperatures in the region will be hotter, and there will be more frequent heat waves.

Since 1955, the Southeast has experienced nearly a 1.8º F temperature increase. If climate change continues to progress unmitigated by a switch to low carbon energy, then carbon dioxide concentrations could double relative to current levels during the 21st century.

The region faces a catastrophic 10.8º F rise in average temperatures if we cannot move to low carbon energy fast enough.

Under the best case scenario, assuming that big greenhouse gas emitters like the US and China can  switch to renewable energy within a very few years, climate change and temperature rise could be held to a merely 3.6º – about double what the region has seen since the fifties.

Everything depends on whether and how fast we can agree to make a switch to clean energy that does not cause truly catastrophic climate change. It is too late to prevent events like rivers warming to 90 degrees.