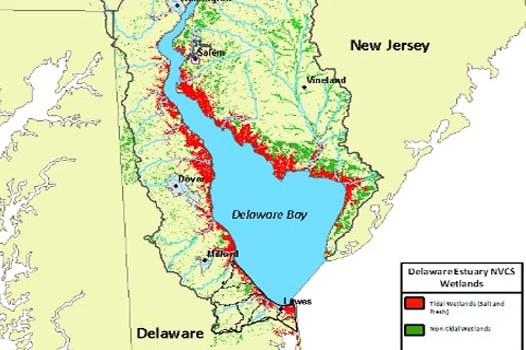 Fresh water that now is flowing to the sea in the Delaware estuary is threatened by future sea-level rise resulting from rising temperatures caused by greenhouse gas emissions, a new study finds. As sea levels rise, salt water will move inland up the estuary. Drinking water for over 15 million people will be endangered.

The Partnership for the Delaware Estuary studied impacts on drinking water, tidal wetlands and shellfish like the local oysters and freshwater mussels in “Climate Change and the Delaware Estuary.” and how people can adapt to help protect the threatened resources.

Drinking water, tidal wetlands and shellfish are key resources for the estuary; and all three are vulnerable to effects of climate change, including warmer temperatures, higher sea levels and saltier water. Oysters alone brought about $19.2 million into the state in 2009.

The study warned that drinking water infrastructure like treatment plants could be damaged or inundated by flooding, sea-level rise and storm surge, because they are placed close to water resources, right in the path of flooding and storm surge.

Currently a narrow fringe of freshwater wetlands protects the freshwater, but the wetland marsh plants are very susceptible to rising salinity.

Current efforts to reduce carbon emissions will produce results in 20 to 30 years. But unfortunately, due to 30 years of political paralysis (as a result of a very effective long term disinformation campaign by the fossil fuel industry) so some rising sea levels are already in the pipeline as a result of temperature rise that comes from past and current carbon dioxide emissions.

Depending on how fast carbon emissions can be reduced (by switching to a clean energy economy based on renewable resources like off-shore wind, desert solar, green building technology and electric vehicles) the predictions are for a temperature increase to affect the region of between 2C or 3.6 F (if we move fast) and 4C (if we delay) which would be a 7.2 degrees rise Fahrenheit.

If the temperature rise is lower, the sea level will rise one and a half feet, and if temperatures are driven higher by our inaction over the next few years, sea level rise will be almost five feet by 2100 (and continue rising in subsequent centuries).

The entire Eastern Seaboard of the US is subject to a similar range of scenarios. We do stand and fall together.

This study focuses on just one region, and finds that in this one estuary 15 million people and a $19 million a year seafood industry are endangered. Whatever will it take for us to notice we have been put to sleep by the richest industry in the world, and take action?