You are here: Home / Activism/Events / Private vs. Public Water: A Tale of Felton, CA 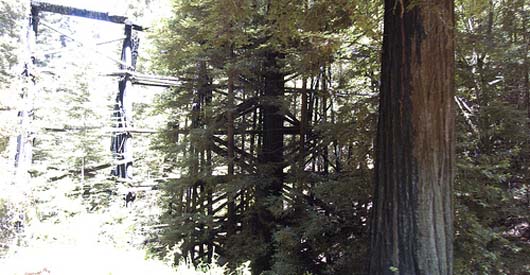 Do you know who owns your water?  Many communities have moved from public water works to privatization of this important utility.  Corporations raise rates, and citizens are left with no local control.  In many towns, grassroots movements have successfully fought corporate water acquisition.  Felton, California is a model of such citizen action.

Felton is located near Santa Cruz in the redwoods.  The population of this mountain community is just over 1,000 residents.  Known for its railroad and big trees, for six years this small town fought the privatization of its water utility.

Felton residents formed Friends of Locally Owned Water (FLOW), and with legal help from Santa Cruz County, fought the rate increase, which the utilities commission knocked down to 44 percent. But the threat of escalating costs loomed, so FLOW began working on a plan to buy the water system and turn it over to the nearby San Lorenzo Valley Water District (SLVWD), a public utility.

This grassroots movement gained the help of Food & Water Watch and successfully passed the $11,000,000 Measure W to purchase the water utility, but Cal-Am refused the offer and said the water district was not for sale.  Felton did not give up:

Meanwhile, back in Felton, there was no backing down. Its purchase offer brushed off, the community turned to eminent domain to force a buyout. Cal-Am responded by doing all it could to make the system seem more expensive. Its appraisal valued the system at $25 million, far more than Felton‚ $7. 6 million offer. This was based in large part on Cal-Am‚ assertion that the 250 acres of watershed land should be valued based on the revenue that would be generated from selling the timber and the land for commercial development, a position the community hotly disputed.

Fearing the eminent domain trial, RWE agreed to sell the utility, including donating the 250 acres of redwoods.

The privatization of water in the United States is largely due to reduction in federal funds and changes to tax laws.  Since corporations are motivated by profits, water conservation is not a priority.  The more water used, the more sold, the more money made.  Communities facing water privatization can learn a lot from the struggles and successes of Felton.