You are here: Home / Climate Change / Increased CO2 in World's Oceans Causes Fish to be Attracted to Predators 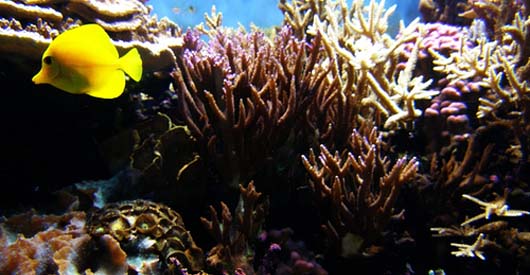 Human activity is not only causing increased carbon dioxide (CO2) emissions in our atmosphere, but our oceans are suffering as well.  CO2 absorption causes the water to become more acidic, which in turn alters marine life’s natural instincts to avoid predation.  Researchers fear the results will have “far-reaching consequences for the sustainability of fish populations”.

In order to conduct research for this new study published in the Proceedings of the National Academy of Science (PNAS), scientists recreated sea conditions expected by the end of this century if “humanity keeps on burning coal and oil at current rates”.  The results were dire, as young fish behavior was altered in a way that decreased their chances of survival from 50 to 80 percent. Science Daily explains:

As CO2 increases in the atmosphere and dissolves into the oceans, the water becomes slightly more acidic. Eventually this reaches a point where it significantly changes the sense of smell and behaviour of larval fish,” says team leader Professor Philip Munday of the Australian Research Council’s Centre of Excellence for Coral Reef Studies (CoECRS) at James Cook University.
Instead of avoiding predators, they become attracted to them. They appear to lose their natural caution and start taking big risks, such as swimming out in the open — with lethal consequences.”

In the experiment, young fish did not swim towards protective shelter, such as coral, but remained out in the open where predation was inevitable.  As a result of these “dangerous” changes in behavior, less fish will survive to “replenish adult populations”.
Researchers are not only concerned about the negative consequences on marine life, but the implications of “the amount of food we will be able to obtain from the sea” are significant if our oceans continue to become more acidic from increased CO2 absorption.  Coupled with overfishing, the outlook is grim for world fish stocks.