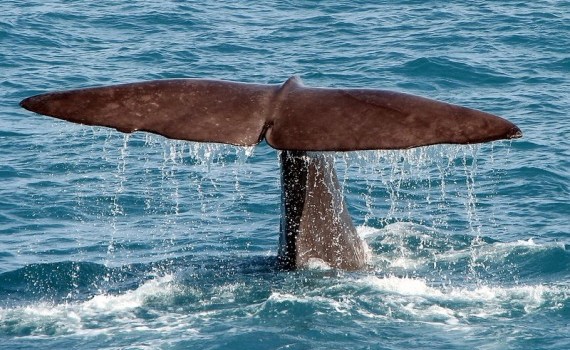 Bad news and bad news for whales these days — endangered baby whales are dying from the BP oil spill and the toxic dispersants used to “clean it up” and the International Whaling Committee has been discussing whether or not to legalize whaling of endangered whale species.

Now, a new study finds that sperm whales in even the most remote areas of the Earth’s oceans contain extremely high levels of toxins and heavy metals.

Of course, this is not only bad news for the whales, but also for humans

These contaminants, I think, are threatening the human food supply. They certainly are threatening the whales and the other animals that live in the ocean,” said biologist Roger Payne, founder and president of Ocean Alliance (the research and conservation group that produced the report).

The report “noted high levels of cadmium, aluminum, chromium, lead, silver, mercury and titanium in tissue samples taken by dart gun from nearly 1,000 whales over five years. From polar areas to equatorial waters, the whales ingested pollutants that may have been produced by humans thousands of miles away, the researchers said.”

Extremely High Levels of Mercury in the Whales

Mercury, a well-known toxin that babies and women are supposed to avoid, was found in the whales at up to 16 parts per million. Sharks and swordfish, which are generally considered to be high in mercury, generally have it in their system at about 1 part per million.

The average for the whales was 2.4 parts per million. However, the researchers indicated that their internal organs probably had much more than the skin samples they used to measure this.

Given that these toxins move to the top of the food chain, whether it be whales or humans, and are then passed on from mother to baby naturally from there, this is a matter of great concern for many humans (whether they realize it or not).

“You could make a fairly tight argument to say that it is the single greatest health threat that has ever faced the human species. I suspect this will shorten lives, if it turns out that this is what’s going on,” he said.

Do Whales Have a Chance at Survival?

Payne’s prediction for the whales is even worse: “I don’t see any future for whale species except extinction,” Payne said. “This is not on anybody’s radar, no government’s radar anywhere, and I think it should be.”

Toxic chemicals that come from coal power plants, stainless steel, packaging, and more don’t disappear easily. They move through the cycles of the Earth’s natural systems and find their way more places than we can imagine. If we want to protect ourselves and countless species from the results, I think the only solution is to stop using and producing these toxins altogether. No small feat, but something we can each try to do in our own lives.