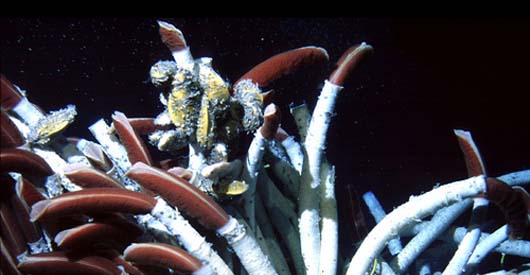 The demand for metals used in the production of electronic devices, such as cellular phones and laptop computers, has pushed China to the deep sea.  Searching for copper, nickel, cobalt, silver and gold, the Chinese want to explore inactive hydrothermal vents at a depth of over 5,000 feet in international waters.  Environmentalists fear marine pollution.

Hydrothermal vents are geysers, like Old Faithful, existing on the ocean floor. The University of Delaware explains:

How do hydrothermal vents form? In some areas along the Mid-Ocean Ridge, the huge plates that form the Earth’s crust are moving apart, causing deep cracks in the ocean floor. Seawater seeps into these openings and is heated by the molten rock, or magma, beneath the crust. As the water heats up, it rises…

Chimneys top some vents. These smokestacks are formed from dissolved metals that precipitate out (form into particles) when the super-hot vent water meets the surrounding seawater, which is only a few degrees above freezing.

China has filed the first application to the International Seabed Authority (ISA) for deep-sea mining in the Indian Ocean.  Although it has not been approved yet, there is concern it will open the door for more permits in international waters.  Given the risks of working at such depths, evident in the Gulf Oil Spill, environmentalists are concerned, especially when many of the sought after metals are considered heavy and toxic. The Independent describes the concern:

Although no one knows exactly what damage a deep-sea mine would do to the marine ecosystem, experts have no doubt that removing a considerable part of the sea floor would cause a major disturbance.

Not only that, but plumes of sediment – which may well be toxic – could have an impact over a much wider area, especially for filter-feeding marine organisms, which are common on the seabed. Such plumes might also block out light, hindering the development of plankton.

China already has a monopoly on rare earth metals, and the demand for metals is growing as technology, including green tech, demands it.  Are the risks of marine pollution from deep-sea mining acceptable?   ISA will decide in April 2011.