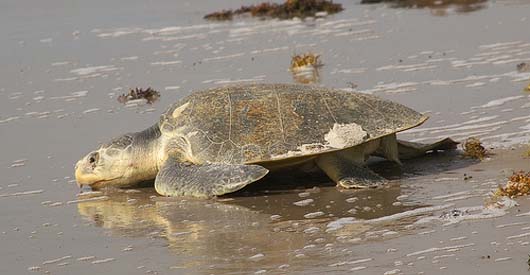 Environmental groups led by the Center for Biological Diversity and the Turtle Island Restoration Network along with local shrimp boat captains have filed a lawsuit and temporary restraining order against oil giant British Petroleum (BP) to stop the burning of endangered sea turtles.  Using the Endangered Species Act and the Outer Continental Shelf Lands Act, the lawsuit alleges BP of “flagrant violations of its lease with the United States”.   The Obama administration has confirmed marine creatures, including sea turtles, are being burned alive in the “burn fields”.

Mainstream media coverage of the oil spill clean up has praised the “burn fields” for a way of quickly disposing of a small part of the 70,000-100,000 gallons leaking each day.  Dark billowing smoke can be seen from these 500-square-mile “burn fields” causing concern for the atmosphere, but corralled in the oil soaked sargassum are endangered marine animals, including the Kemp’s Ridley turtle.   The Guardian explains:

The killing of the turtles – which once teetered on the brink of extinction – has outraged environmentalists and could put BP into even deeper legal jeopardy.
Environmental organisations are demanding that the oil company stop blocking rescue of the turtles, and are pressing the US administration to halt the burning and look at prosecuting BP and its contractors for killing endangered species during the cleanup operation. Harming or killing a sea turtle carries fines of up to $50,000 (£33,000).

According to the US government, 436 endangered sea turtles have perished since the Deepwater Horizon oil catastrophe began on April 20, 2010.  There are five endangered or threatened species of sea turtles in the region:  greens, loggerheads, hawksbills, Kemp Ridley, and leatherbacks.  The Center for Biological Diversity describes the tragedy:

“This is the most inhumane thing I have ever heard, to light that oil when sea turtles are out there trying to escape it,” said Carole Allen, Gulf director of Turtle Island Restoration Network in Houston, Texas.

“BP is burning turtles alive and it is cruel, heartless and a crime we can’t and won’t allow to continue,” said Todd Steiner, biologist and executive director of Turtle Island Restoration Network. “Sea turtles were critically endangered before BP created America’s worst environmental catastrophe, and every effort possible must be taken to rescue endangered turtles from this oil spill. BP needs to reverse course and help double our efforts to rescue sea turtles, not prevent their recovery.”

By employing more resources, BP could still continue the practice of “burn fields” by removing and protecting species before torching.  Killing sea turtles is just another example of BP’s, as well as the Obama administration’s, “incompetent response” to the catastrophe.  The levels of environmental devastation caused by BP’s oil spill go beyond oil soaked beaches and birds. From toxic oil dispersants to burning alive endangered species, there is no immediate relief in site.