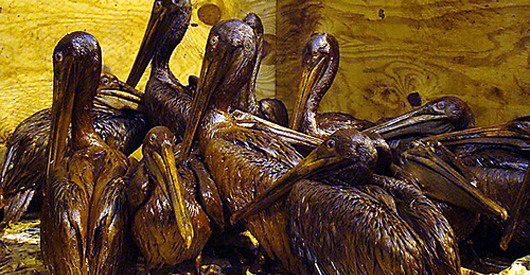 In order to obtain a permit for offshore drilling, you obviously need a plan for the event of a catastrophe, such as the environmental disaster in the Gulf of Mexico caused by the Deepwater Horizon oil spill.  Lawmakers this week examined British Petroleum’s (BP), as well as other oil companies, plans in light of “BP’s struggle to contain the spill”, according to the Wall Street Journal. From listing a dead wildlife expert to protecting extinct walruses, the credibility of these declarations is questionable and been termed “cookie cutter”.

BP is not the only oil giant to have offshore oil plans full of flaws. The Wall Street Journal explains:

Mr. Markey said a review of oil-company response plans on file with the government for wells in the Gulf region found that BP, Exxon Mobil, Chevron and Conoco Phillips had made references to protecting walruses, “which have not called the Gulf of Mexico home for three million years.”…

Mr. Mulva said it was also “embarrassing” that his company’s spill-response plan referred to Dr. Lutz after his death, though he and Mr. Tillerson emphasized that Dr. Lutz was one of multiple experts identified as points of contacts in the event of a spill that required such outside expertise.

BP has been making matters worse by using the toxic chemical dispersant Corexit 9500.  In fact, Corexit 9500 is “four times as toxic as the oil itself”. The US Environmental Protection Agency (EPA) had ordered BP to stop using this toxic chemical at the end of May.  Corexit 9500 in the Gulf may cause toxic rain all over the eastern United States.

Corexit 9500 works as a dispersant both under water and on the surface. Currently, the EPA has authorized BP to use a “maximum of 15,000 gallons per day“.  The EPA explains, “While dispersants have been used in previous oil spills, this is the largest application of dispersants at an oil spill response in the United States.”

BP spill-response plan was written for disaster of greater magnitude than the current spill.  According to the Wall Street Journal:

The company had claimed to have in place sufficient booms, stocks of dispersants and skimmers to deal with a spill far in excess of the volume it is now struggling to contain, and placed low probabilities on oil reaching land in the event of a major spill.

The United States government and the oil companies are obviously to blame for not being prepared for the Gulf oil spill disaster.  Including a species that has been extinct in the region for three million years, as well as listing dead wildlife experts are blatant flaws that should have been caught prior to any permit approval.  Furthermore, toxic dispersants are not a viable option for containment and clean up.  BP did just announce a $5 million grant to Louisiana State University (LSU) for research into the oil and dispersant’s impact; however, this information will come too late to mitigate the effects of the Deepwater Horizon disaster.