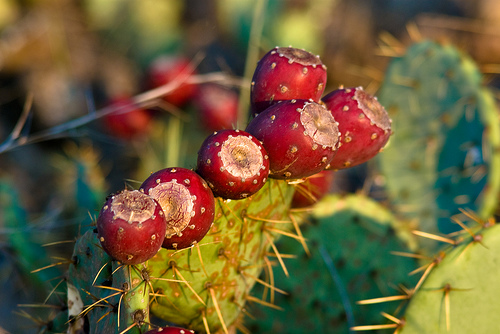 As many as 15 people per minute die from a lack of clean water. Although 75% of the globe is covered in water, the amount of that water that is clean, fresh, drinkable water is very small and the challenge of providing the whole population of the world with such water has been an unachievable task in modern society.

Now, a new discovery is bringing much hope to this issue. A widely available cactus — prickly pear cactus — may hold a key to cheap, clean water. Norma Alcantar of the University of South Florida in Tampa and her research team have found that after extracting the gum that this cactus uses to store water and mixing it with water containing high levels of sediment or the bacterium Bacillus cereus, they are able to filter our 98% of the sediment or bacteria. The gum causes these contaminants to settle at the bottom.

The process for doing this in one’s home is very simple as well.

To replicate the process at home, the researchers say that all one would need to do is boil a slice of the cactus and add it to the water needing to be purified. Sounds simple enough. Cheap and simple only as long as cactus is abundant and available in the place where you need water, however.

Prickly pear cactus are only native to the Western hemisphere and are still primarily located there, so the possibility of them helping with a lack of clean water in Asia or Africa (where the problem is the largest) is more limited than in the Americas.

Beyond availability, questions that still need to be addressed before this could be put into practice around the world include how someone would know that the contaminants have actually been filtered out and which contaminants it actually works for.

I am curious to see where this goes and if it can become a true large-scale solution to a very large-scale problem. Surely, it will not be a solution for the whole world, but it could be one big piece of the pie.