You are here: Home / Bottled Water / Hormone Disruptor BPA is in the Water Now 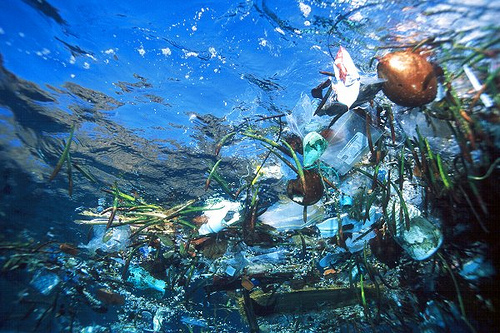 Scientists have now confirmed that an increasingly infamous chemical (or hormone disruptor) that is linked to obesity, miscarriage, breast cancer, prostate cancer, and other health concerns is not just in our plastic bottles, soda cans and canned food, but it’s also in the water.

What is likely to be the number one source? “Unbreakable” polycarbonate plastic — the plastic they use in screwdriver handles, shatterproof eyeglass lenses and other things that are “unbreakable”.


“We were quite surprised to find that polycarbonate plastic biodegrades in the environment,” said Katsuhiko Saido, Ph.D. “This finding challenges the wide public belief that hard plastics remain unchanged in the environment for decades or centuries. Biodegradation, of course, releases BPA to the environment.”

BPA (or bisphenol A) was found in “significant” amounts in sand and seawater from more than 200 sites in 20 countries in this study.

Hard plastic isn’t the only major source, though. Epoxy resin coatings and paints from ships are also considered to be a major source. “Millions of gallons of epoxy resins are used each year to seal the hulls of ships, protecting them from rust and fouling with barnacles and other deposits.” Unfortunately, the BPA in them is finding its way out.

Given the wide range of serious health problems BPA is linked to, this is not good news for anyone. “Recent studies have shown that molluscs, crustaceans and amphibians could be affected by BPA, even in low concentrations,” Saido mentioned. It is proven to create cancerous tumors in mammals. And as mentioned above, studies have shown that it is linked to serious human health problems.

The EPA has just announced that it is launching a major investigation into the impacts of BPA and its presence in our water systems. The FDA has been lagging on regulating this substance, but perhaps with a push from the EPA it will go ahead and do so.

Nonetheless, with the oceans more than slightly littered with plastic, this is likely to create problems for ages to come. If you haven’t heard, the “Great Pacific Garbage Patch” that lies between California and Hawaii is twice the size of Texas and consists mostly of plastic waste and there is now evidence that this is not the only gigantic plastic dump floating in the middle of our four oceans.

Yet another reason to stop using plastic.