You are here: Home / Freshwater Ecosystems / 22,000 US Lakes in Poor or Fair Condition According to EPA 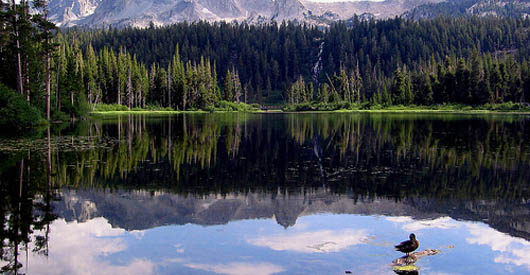 The US Environmental Protection Agency (EPA) has released a draft study finding 44% of US lakes over ten acres are in fair or poor condition amounting to 22,000 lakes.  This study follows earlier news this year that 20,000 US beaches have been closed due to pollution.  Just like beaches, “degraded lakeshore habitat” is one of the “most significant of the problems assessed”.

Sampling 1,028 lakes, the EPA has conducted its first ever survey of ecological and water quality using a “nationally consistent approach”.  The Great Lakes and the Great Salt Lake were excluded from the study.  The survey was conducted by taking one sample from the deepest part of each lake.

The National Lakes Assessment (NLA) found that “poor habitat conditions along the lakeshore and high levels of the nutrients nitrogen and phosphorus are the most significant stressors of those assessed in the survey”.  In fact, “poor biological health is three times more common in lakes with poor lakeshore habitat relative to lakes with good lakeshore habitat.” The results are concerning for human health:

Lakes are widely used for swimming, boating, and many other recreational activities. However, a number of microbial organisms, algal toxins, and other contaminants in lakes can potentially affect human health. The NLA conducted the first-ever national study of algal toxins in lakes. Microcystin – a toxin that can harm humans, pets, and wildlife – was found to be present in about one third of lakes and at levels of concern in 1% of lakes.

Not surprisingly, natural lakes are fairing better than man-made lakes overall, just as they do better in times of drought and with sediment concerns.  The EPA plans to continue yearly assessments of American bodies of water and coastlines.  The NLA provides a good baseline for further studies.