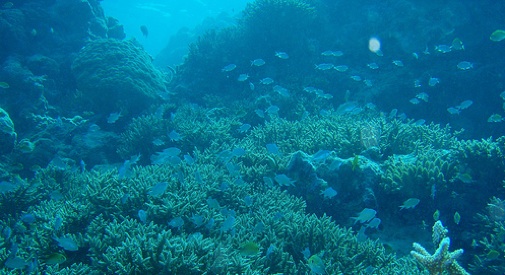 Maldivian cabinet members are learning to scuba dive in preparation for an underwater cabinet meeting later this month. The cabinet will sign a document calling for carbon emission reduction around the globe as part of a campaign leading up to COP15 in December.

In mid to late October (I have seen both the 17th and the 24th listed as meeting dates), Maldives President Mohamed Nasheed and the Maldivian cabinet will convene an underwater meeting. The special session, one part business and one part underwater guerrilla publicity stunt, will have cabinet members using whiteboards and hand signals to communicate.

“The cabinet will don wet suits and scuba equipment and dive to a depth of six metres (20 feet), where a special meeting of the cabinet will be convened. They will then ratify a pledge calling on other nations to slash greenhouse gas emissions ahead of the Copenhagen meeting,” said an unnamed spokesman for the cabinet.

The Maldives is a small atoll country located southwest of Sri Lanka. The very existence of their nation is threatened by rising sea levels due to climate change as 80% of the islands is less than one meter above sea level.

The concern is very real- the UN Intergovernmental Panel on Climate Change said that a 1/2 to 2 foot rise in sea levels by 2100 could make it almost impossible to live on the Maldives. Several other Pacific Island nations are dealing with an increased number of climate change refugees due to rising sea levels.

The Maldives has a population of 330,000 whose entire lives float in the balance of rising sea levels. President Nasheed has even brought up the possibility of purchasing land in Australia, India or Sri Lanka to serve as a new homeland for future Maldivian climate change refugees.