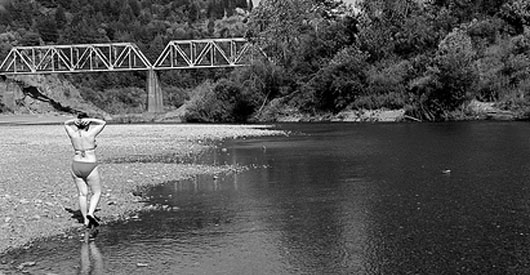 It’s marijuana harvest time in northern California, and the air is strongly pungent with skunk smelling scents. It is also the time of year when many rural residents are anxiously awaiting the rainy season, as they are living without water after the arid summer months. Is there a connection between dwindling water supplies and illegal marijuana cultivation? The answer is yes, according to authorities and environmentalists.

At the end of September 2009, federal officials arrested 38 people and pulled out 49,091 pot plants in Mendocino County. At least one of these busts occurred because officials spotted from the air “a large pump feeding a 4-inch pipe was pumping water to a series of large tanks from the Eel River to provide for the marijuana operation”. The Department of Fish and Game (DFG) and the Mendocino District Attorney are investigating the grow operation for “environmental crimes” and illegal “water diversion”.

Just how much water does a marijuana grow operation use? The Ecology Center reports in an article titled “The Long Thirst”:

Ron Pugh, a US Forest Service special agent in charge of illegal activities on public lands, has spent the past few years concentrating on illegal marijuana grows. Marijuana â€œgardensâ€â€”a misnomer on a grand scaleâ€”are responsible for the majority of thirsty straws draining rivers and creeks that cross public lands…Most of all, they consume water. â€œAs you go downstream on the Eel, the river should grow,â€ says Allman. â€œInstead, it gets smaller because people are pumping into storage tanks and directly into gardens.â€ Allman estimates that 3.6 million pot plants are grown on public landsâ€”â€œThatâ€™s 3.6 million gallons of water a day,â€ he says, â€œpumped out of our creeks and rivers.â€

It’s well known that illegal marijuana cultivation pollutes our forests and waterways. In fact, Mendocino County’s “per capita sales of rat poison are the highest in the nation”.Â Â  That’s pretty staggering for a county with a population of 86, 221 people.Â  It should also be noted that many of the illegal pot gardens are not cultivated by Mendocino residents.Â  Only eight of the recently arrested were from the county.

As California concludes its third year of drought, and the plight of salmon is once again at stake, residents are growing concerned about the water usage involved in marijuana cultivation.Â  In fact, a friend of mine is almost out of water and can’t help but wonder if the 5,000 plant garden eradicated off his creek has something to do with his dwindling drinking water supplies.