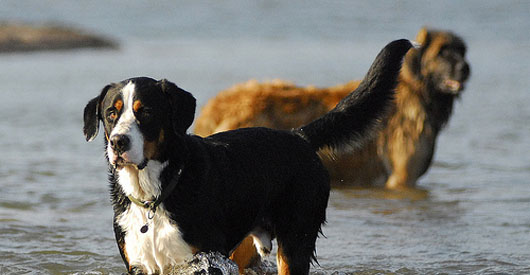 Four Oregon dogs have died from toxic algae found in Elk Creek near its confluence with the Umpqua River. Low flows resulting from drought have caused algae blooms that are toxic to pets, humans, and livestock.Â  One dog’s cause of death has been confirmed as caused by blue-green algae, leading officials to presume similar causes of death for the other three dogs.

Within a ten-day period, all four dogs visited Elk Creek and later perished. One dog died on the spot, whereas the other dogs died after vomiting and convulsing in the car.Â  The first death occurred on August 21, 2009, and although officials suspected algae as the cause, they also considered coyote poison; however, tests conducted by Oregon State University’s (OSU) Veterinary Diagnostic Laboratory confirmed the neurotoxin produced by blue-green algae was present in one dog.

The dog deaths have prompted officials to issue warnings.Â  The News-Review writes:

The toxins, which are typically released when the blue-green algae dies, has not caused any known illnesses in people, said Curtis Cude, program manager for the hazardous tracking program with the state health department. The toxin can cause harm to people, though.

The toxin found in the water causes almost immediate clinical signs, such as muscle tremors, respiratory disease and convulsions. Respiratory paralysis can lead to death within 20 to 30 minutes, according to the release.

The public needs to be aware that these potentially fatal blooms can occur in any body of standing or slow-moving water. If you take your dog for a walk in the woods, or along a drying creek or lake bed, watch for stagnant, often cloudy water that appears to have algal growth.

The problem of dogs dying from toxic algae and rivers is not confined to Oregon.Â  Nine dogs have died in northern California since 2001.Â  California Department of Public Health research scientist Sandra McNeel explains the link to climate change:

As a scientist I get uncomfortable speculating, but thereâ€™s good support in the literature to say that as our years get dryer and hotter, as water levels decrease in rivers and reservoirs and the Delta, that lower water levels and increased water temperatures provide a better environment for blue-green algae to bloom.

Global warming is not the only culprit when it comes to toxic algae.Â  According to Leslie Adams of Klamath-Siskiyou Wild, the source of the problem is external nutrients, specifically “run-off from fertilized land, erosion resulting from deforestation and sewage”. Controlling and reducing this run off and listing contaminated rivers, creeks, and lakes as “‘water quality impaired’ under the Clean Water Act” are essential steps for combating the problem beyond simply issuing warnings to water enthusiasts.

McNeel predicts that we may see the toxic algae appear in May rather than July as a result of global warming.Â  There is also concern that the algae may make its way into city water supplies.Â  As a dog owner and mother, toxic algae in our rivers scares me.