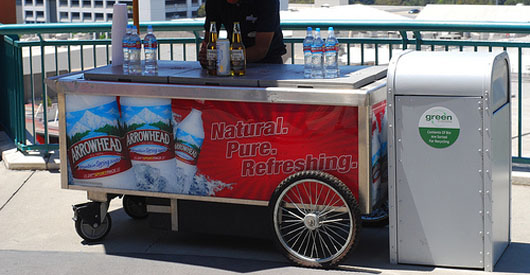 In recent years, Nestle has been hard fought by communities across the country over bottled water plants, as citizens are concerned that local aquifers will be depleted.Â  From Washington to California, towns have been divided and long battles fought as the maker of Perrier, Poland Spring, S. Pellegrino, and Arrowhead bottled waters plans to expand.Â  Nestle is the largest bottled water company in America.Â  Recently, the company won approval in south central Colorado for another source of its bottled water brands.

One of the towns that has fought a long battle with Nestle is McCloud, California in the shadow of Mt. Shasta.Â  This community of 1300 continues a six year battle over fear that the town’s water would be placed into the “corporate giant’s hand“.Â  Business Week explains what is at stake in McCloud:

It is here that NestlÃ© Waters North America (NWNA), a subsidiary of the Swiss food and beverage giant, plans to operate one of the largest spring-water bottling plants in the U.S. The 1 million-square-foot facilityâ€”picture five Wal-Mart (WMT) supercenters strung togetherâ€”is to rise on the site of McCloud’s defunct lumber mill, a 250-acre swath of land that bends around the base of the mountain. NestlÃ© aims to draw 1,250 gallons a minute of water from McCloud’s glacier-fed springs. The company would then pack 300 semi-trailers a day full of Arrowhead brand water, truck it as far away as Los Angeles and Reno, and sell it at prices that are as much as 1,000 times more than the cost of tap water. In exchange, NestlÃ© has agreed to pay McCloud roughly $350,000 a year for the water and create up to 240 jobs in and around the town.

Last year, Nestle canceled its bottled water contract in McCloud; however, this spring they proposed a reduced water bottling project in Squaw Valley Creek and are renegotiating a “new deal“.

Despite difficulties with the community of McCloud and similar responses in Washington state, Nestle has its eyes on the Columbia River in Oregon and a spring in Chaffee County, Colorado.Â  Richard McIntyre, a consultant helping Nestle opponents in McCloud and Chaffee County, Colorado explains Nestles tactics of targeting small communities for its water bottling plants:

Nestle’s MO is to target small, struggling communities that have lost their resource base and make them a deal it appears they can’t refuse.Â  They don’t tell you that most of the jobs are $10 an hour, or that you’re going to have trucks running through your community 24/7.

These low wages are exactly what Nestle promised the community of McCloud.Â  Nestle currently operates over 50 spring-fed sites in the US. Will Chaffee County, Colorado be the home to the next water plant?Â  County commissioners have agreed to allowing Nestle to withdraw 65 million gallons of water a year, as long as they restrict truck traffic during the summer tourist season.Â  In addition, the company must allow access to fisherman and place conservation easements on its land; however, residents aren’t convinced their own drinking water supply will not be affected.Â  According to the LA Times, Nestle plans to mitigate these effects:

Nestle’s plan in Colorado is to extract water from the aquifer, pipe it several miles to a truck stop, then send it to a bottling facility in Denver. Because it will be taking water that otherwise would flow into the Arkansas River, Nestle intends to replenish the river with water purchased from the Denver-area city of Aurora.

Only time will tell if the residents of Chaffee County will be able to pull the plug on Nestle’s latest bottled water project.