You are here: Home / Technology / Can the World's Largest Water Pump Stop New Orleans From Getting Pummeled by Hurricanes? 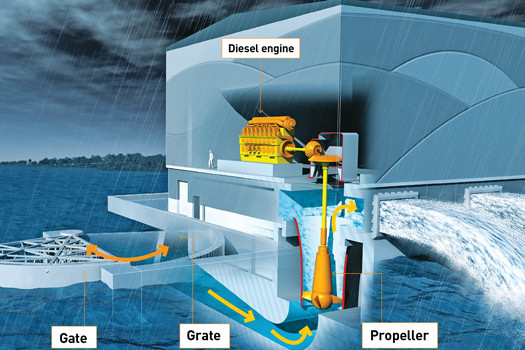 
Anyone who witnessed the horror of Hurricane Katrina knows that New Orleans could use some serious protection from the Gulf of Mexico and Lake Pontchartrain. The levees currently installed in the city are a joke, but the U.S. Army Corp. of Engineers is in the midst of building the world’s largest water pump–a pump that hopefully will send floodwaters back into the sea before they hit New Orleans streets.

The $500 million project, which began construction this summer, will consist of 225 foot-wide, 32 foot-tall metal gates that block storm surges along with a giant pumping station that can move 150,000 gallons of floodwater each second–the equivalent of emptying 15 Olympic-size pools every minute. Steel bars protect the pumps from runaway trees, cars, and other debris.

When complete, the station will supposedly be able to withstand everything from runaway barges to ultra high-speed winds. The Corp. of Engineers hopes to have the pump complete by 2011, but it all depends on whether this year’s hurricane season slows things down. Combined with innovations like IBM’s high-tech water data software, the water pump might just be able to–dare we say it–prevent the next Hurricane Katrina.