You are here: Home / Fishing / Save the Krill, Save the Whales 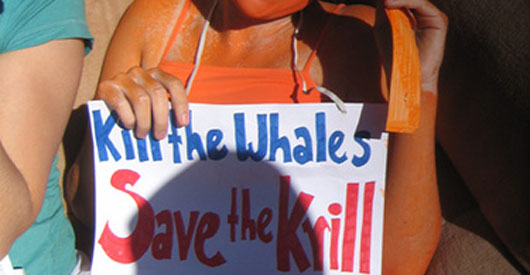 The National Oceanic and Atmospheric Administration’s (NOAA) fishery services has issued a ban on krill fishing along the coast of Oregon, Washington, and California. Many marine species depend upon krill as a food source. William Douros, NOAA’s West Coast regional director of marine sanctuaries, explains, “Krill is a critical prey for a huge number of vertebrate species there.”

NOAA has banned krill fishing within 200 miles of the West Coast.Â  The Associated Press reports:

Krill are taken primarily off Antarctica, where scientists have raised concerns the fishery has upset the food web, making life tougher for penguins and other marine life. A smaller fishery has been going since the 1970s off British Columbia. The catch is processed into food for salmon farms, as well as home aquariums, and an oil consumed by people.
The idea to save krill for marine life originally came from managers of the national marine sanctuaries off California, who became concerned in 2003 after rockfish populations declined, and later in 2005 when a downturn in krill populations was blamed for starving sea birds and other West Coast marine life.

The krill fishing ban starts on August 12, 2009. Krill are unique creatures because they fill the essential role of converting plant matter into animal proteins — a task which many larger creatures such as salmon, rockfish, seals, blue whales and humpback whales depend on them for.Â  The Christian Science Monitor explains their significance for marine life:

In the marine realm, itâ€™s krill that play the important role of converting plant matter into flesh. Anything thatâ€™s not a vegetarian â€“ and that includes whales, seals, and many, many fish â€“ relies on krill, or similar shrimplike creatures (like copepods), to convert plant matter into animal protein and fat.

Salmon eat them; thatâ€™s how they get their characteristic orangish color. So does the blue whale. That tells you something about the little shrimpâ€™s abundance. There are enough to support the largest animal ever to have existed.

There is currently no krill fishing in the restricted area, and fishery managers are trying to stay one step ahead of the industry.Â  The demand for krill is rising, and there’s concern we may be reaching a “fish meal trap”, where demand for fish meal made from krill will be greater than the supply.Â  Peak krill may be around the corner.

Environmentalists are applauding NOAA’s cautionary ban.Â  Mother Jones calls it a “rare instance of foresight in fisheries management”.Â  The krill ban is not just about saving whales, but about saving entire marine ecosystems.