You are here: Home / Marine Life / Like Chimps, Whales and Dolphins Found to Possess Qualities of Personhood 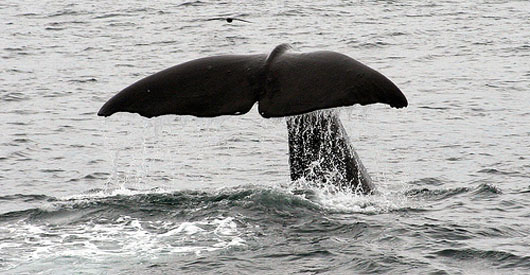 Researchers have discovered that Cetacea, long thought to be “the most distinctive and highly specialized orders of mammals” actually exhibit characteristics of “personhood.”Â  Like chimpanzees, whales and dolphins exhibit “considerable social complexity and individual distinction.”Â  Scientists believe future research will prove Cetacean personhood will approach that of primates.Â  Such research gives even more significance to ending international whaling programs.

According to NOAA, there are approximately 78 species of Cetacea, which are all protected under the Marine Mammal Protection Act.Â  Findings of Cetacean “culture and society” are based upon studies of killer whales, bottlenose dolphins, humpback whales, and sperm whales.Â  The idea of personhood is based upon the ability to “possess self-awareness, feelings and high-level cognitive powers”.Â  In fact, Cetacan evolution evolved millions of years before primates.Â  Lori Marino, an evolutionary neurobiologist, explains:

If an alien came down anytime prior to about 1.5 million years ago to communicate with the â€˜brainiestâ€™ animals on Earth, they would have tripped over our own ancestors and headed straight for the oceans to converse with the dolphins…The parts of the brain that are involved with processing emotion and social relationships are enormously complex, and in many cetaceans even more highly elaborated than in the human brain. If we assume that the limbic system is doing what itâ€™s doing in all mammals, then something very high-level is going on.

The significance of this research may shatter the idea that humans are an “exclusive species”.Â  Wired explains:

As the annual International Whaling Commission meeting stumbles to a close, unable to negotiate a compromise between whaling opponents and people whoâ€™ve killed more than 40,000 whales since 1985, scientists say these aquatic mammals are more than mere animals. They might even deserve to be considered people.

Not human people, but as occupying a similar range on the spectrum as the great apes, for whom the idea of personhood has moved from preposterous to possible. Chimpanzees, gorillas and bonobos possess self-awareness, feelings and high-level cognitive powers. According to a steadily gathering body of research, so do whales and dolphins.

The evidence of Cetacean “personhood” is based upon self-recognition, social behavior, tool use, and communication that may include syntax, dialects, and grammar.Â  Much of whale research has been limited by “the underlying desire to relate every â€˜culturalâ€™ characteristic to a functional biological explanation,” according to Amanda Moore of UC Irvine.Â  This biological restriction may change as more scientists gather more evidence of whales’ cognitive abilities.Â  Whale and dolphin personhood may not be identical to humans, but hopefully the evidence will give new respect and protection for mammals of the sea.