You are here: Home / Infrastructure / Rainwater Collection Now Legal for Some in Colorado; Still Illegal in Utah 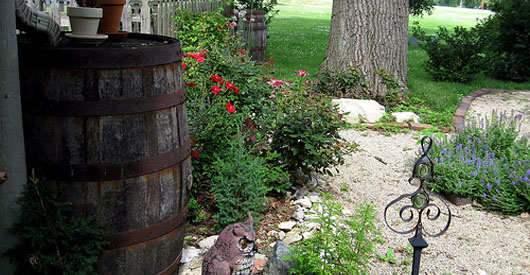 It seems insane to think that it would be illegal to have a rain barrel and practice rainwater collection, but that’s exactly what two new laws in Colorado have changed.Â  Coloradans have broken the law to collect the water drops that fall from the sky because technically they do not own them.Â  Durango resident Tom Bartels explains, “I was so willing to go to jail for catching water on my roof and watering my garden, but now Iâ€™m not a criminal.”Â

It’s hard to think of someone as criminal for collecting precipitation, but many western states closely guard water rights, including water that falls from the sky.Â  The New York Times explains:

Precipitation, every last drop or flake, was assigned ownership from the moment it fell in many Western states, making scofflaws of people who scooped rainfall from their own gutters. In some instances, the rights to that water were assigned a century or more ago.

The concern is that collected rainwater will never reach creeks and streams, but a 2007 study found that 97% of precipitation never naturally reached waterways due to evaporation and plant use thus convincing lawmakers rainwater collection should be legal, well at least for some residents.Â  Two new laws in Colorado make it legal for some residents to collect rainwater if they have an “exempt well”.Â  The Rainwater Observer reports:

The bill will limit the catchments to properties served by an â€œexempt well,â€ that is, a well that is allowed to pump regardless of priority because the amount of water produced is so small that it is assumed that no senior rights holder will be harmed.Â  While this bill would be a step forward for those who support rainwater harvesting, it would not apply to urban residents since these â€œexempt wellsâ€ are not common in the urban landscape.

Rainwater collecting Coloradans need to apply for a permit and must not use the water for irrigating more than an acre of land.Â  To be eligible for a permit, you must live outside of a municipal water district and qualify or already have a well.Â  The other new Colorado rainwater law establishes urban pilot studies for collection.

For residents of rural Colorado, it is a start, but rainwater collection is still illegal in Utah.Â  Laws vary greatly across the arid West.Â  The New York Times expounds:

Just 75 miles west of here, in Utah, collecting rainwater from the roof is still illegal unless the roof owner also owns water rights on the ground; the same rigid rules, with a few local exceptions, also apply in Washington State. Meanwhile, 20 miles south of here, in New Mexico, rainwater catchment, as the collecting is called, is mandatory for new dwellings in some places like Santa Fe.Â  And in Arizona, cities like Tucson are pioneering the practices of big-city rain capture.

Utah’s SB 128 could change that by allowing residents to store up to 2,500 gallons of rainwater.Â  As the West faces continual drought, residents need to be able to legally seek out alternative sources for fresh water; however, the impact on streams and rivers should be considered.Â  According to the Sierra Club, rainwater is “often a problem rather than a resource” for municipal communities. Rainwater collection in urban environments could help cities deal with stormwater runoff pollution.