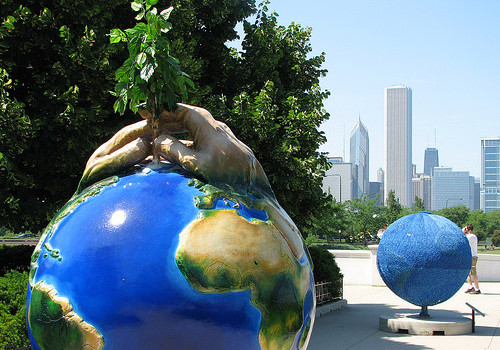 Chicago wants to be the host city for the 2016 Summer Olympics.Â  One way the Windy City is trying to stand out from the other candidate cities is by hosting “Blue-Green” games.

To compete at the highest level, athletes need ideal conditions. Chicago 2016â€™s concept for the Blue-Green Games will create those conditions by not only providing athletes with optimal venues but also addressing the air they breathe and even the water that sustains them. The concept is simple: blue for clean air and water, and green for parks and nature. Working with more than 75 public and private organizations, Chicago 2016 has developed a plan that will reduce the total impact of the Gamesâ€”on both carbon and waterâ€”so that the only footprints remaining after the Closing Ceremony belong to the athletes.

Beyond using renewable energy and recycling, the Water Positive principle “will not only reduce water usage during the Games, but also increase access to clean water for people throughout the world.”Â  Chicago plans to use the games to raise global awareness of the world water crisis.Â  Specifically, the games will practice water conservation, participate in the international “Clean Water through Sport” program, and provide water education.

One unique idea Chicago is proposing is to build “Eco-Boulevards” that create fresh water.

More than one billion people do not have access to clean water. During the Games, Chicago will showcase water sustainability by creating a series of eco-boulevards throughout the city. Functioning as a giant â€œliving machine,â€ the eco-boulevards will generate clean water naturally, through treatment of Chicagoâ€™s waste water and storm water by microorganisms, fish, plants and small invertebrates. Treated water will subsequently be harvested and/or returned to the Great Lakes basin.

Using the Olympic Games to highlight environmental issues will inform many people around the world, as well as promote sustainability for sporting events. Chicago also hopes to become an “compelling environmental model for future organizing committees.”Â  Focusing global attention on the importance of clean air and water is necessary to bring about needed change. If Chicago can promote water activism while hosting one of the most popular sporting events in the world, they have my vote for host city in 2016.