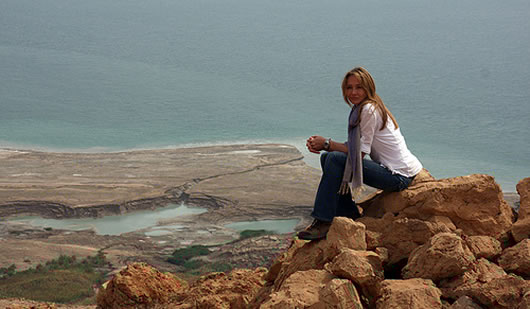 This is the the fourth post in a six post series that follows Alexandra Cousteauâ€™s Blue Planet Expedition, a 100 day journey to 5 continents to study the interconnectivity of water.

After Botswana, Alexandra Cousteau’s next mission was to investigate the role that fresh water access has played in the Israeli/Palestinian conflict in the West Bank.

After visiting Jordan, she arrived at the Sea of Galilee in Israel, which is also known as Lake Tiberias. Israel surrounds the large lake on all sides, having captured the Golan Heights (along the eastern shore), from Syria in 1967. The Golan is the main water source for the Sea of Galilee. Israel pumps water out of the lake and distributes it its cities.

Cousteau’s blog confirms the tragic impact of Israel’s actions on the surrounding countries:

“The devastating part of the water story is that once it controlled the watershed, Israel dammed the Sea of Galilee completely, severing the Jordan River from its primary replenishing source. The country of Jordan also taps the river heavily in the north. As a result, the Jordan River, which I remember hearing as a child was â€œdeep and wideâ€ is now, according to our Israeli guide from the Arava Institute for Environmental Studies Clive Lipchin, “narrow and polluted.””

The West Bank area has been conflict ridden for years, drought only exacerbates the situation. Both the Israelis and the Palestinians are feeling the impact of continuous dry spells, but Israel, which controls the watershed, has tightened its grip on water supplies to Palestine.

Palestine gets only one-fourth of the water allotment that Israel gets. While Jordan has agriculture all along the Jordan River Basin, Israel wonâ€™t allow Palestinians access to the river. Hence, the latter are largely dependent upon groundwater and rainfall. However, these supplies decrease each year. The International Committee of the Red Cross has come to Palestine’s aid, as Israel continues to restrict supplies, by trucking water in to the worst affected areas of the southern West Bank.

“â€œDo we deserve this treatment?â€ asks an official from the local Palestinian council. He dons a brown polyester suit and chain-smokes as we talk. â€œWe have no self-determination. We arenâ€™t even allowed to dig wells without Israeli permission. We canâ€™t afford to treat our sewage, so our groundwater gets more and more polluted.â€ He takes a dramatic puff of his cigarette. â€œThe Israelis know what theyâ€™re doing. Theyâ€™re using water as a weapon. If farmers canâ€™t irrigate their fields, theyâ€™re forced to go to work in construction or move away or take government money. This gives Israelis more land security, because it separates the Palestinians from their land.â€”

Cousteau has attempted to put a positive spin on things by asking whether the issue of water scarcity can be transformedÂ  into an opportunity that brings people of different religions and conflicted histories together. But although many agree on the need for regional collaboration, few are actually willing to come forward to do what it takes to separate water from politics. Perhaps it is inevitable that this is the way things have been and will always be.

Watch this video in which Cousteau interviews Muna Dajani, Palestinian Student, Arava Institute Alum, about the Israel-Palestine water and politics.

For more information about the Blue Planet Expedition, visit http://www.alexandracousteau.org.