You are here: Home / Marine Life / Algae: A Clean Tech Asset or a Health Liability? 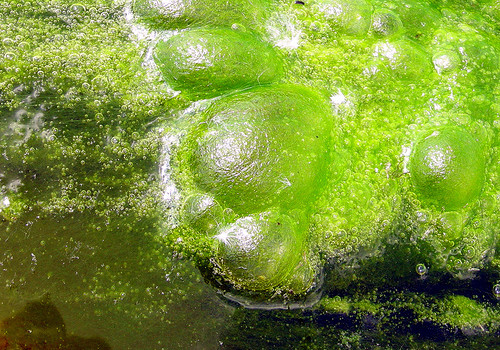 As clean tech research develops fuels synthesized from nature’s ingredients, algae has become synonymous with protecting the environment. However many algal strains are toxic enough to cause massive fish and coral die-offs.

Algae has been touted as an all-important source of fuel in the new energy economy. Algal oil, which is produced by algae can be used to produce biodiesel. Micro algae multiplies very quickly making it an ideal product to farm. One acre of algae can produce between 5,000 and 20,000 gallons of oil that can be converted to biodiesel. Biodiesel production from algal oil has the potential to produce the amount of biodiesel needed to completely replace gasoline.

However the fact that algae multiplies rapidly, is also the cause for potentially fatal algal blooms in natural water bodies throughout the world.Â  The specific names of algae vary based upon the species of microscopic plant. However, the basic mechanism of these phytoplankton, which thrive in oceans, rivers or lakes alike, is the same. Under certain favorable conditions, they can multiply so rapidly they form dense toxic patches known as an algal bloom.

A study conducted by the Environment Agency-Abu Dhabi (EAD) has identified a dominant strain of algae called Gymnodinium catenatum. This phytoplankton that is toxic to people if eaten in seafood. Effects range include gastrointestinal problems, neurological disorders, and possibly even death. As the algae dies, it sinks to the bottom of the ocean, where it rots, consuming large amounts of oxygen in the process. This lack of oxygen then leads to the eventual kill-off of marine life in the area.

Toxic algal blooms are on the rise in many parts of the world. Already, this phenomenon has devastated marine life and industry in the waters around Texas, New York, Bulgaria and Dubai.Â  It is not clear why such blooms are taking place however, there is a growing belief among many biologists that the urbanization of coastlines could play a major role.

â€œHarmful blooms are having more impact, in my view because human exploitation of the coastal zone is having more impact,â€ says Tim Wyatt, who compiles a newsletter on behalf of the Harmful Algal Bloom Program of UNESCOâ€™s Intergovernmental Oceanographic Commission (IOC).