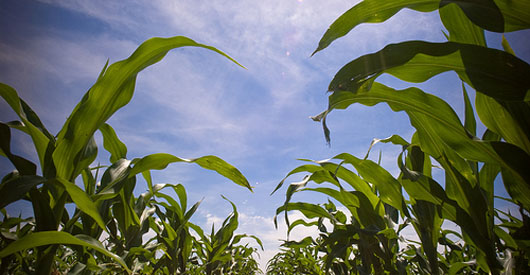 Biofuels, especially ethanol, have come under criticism for raising the price of food and contributing to the overuse of antibiotics; however, there is a new concern that biofuel production is negatively impacting regional water supplies. A recent study in the journal Environmental Science & Technology reports that to produce a gallon of ethanol in some regions of the US it takes as much as 2,100 gallons of water from farm to fuel pump.

Ethanol production processes are water intensive; often the process water required is more than is available locally, causing controversy over siting of the plants. Corn production on irrigated lands accounts for a major proportion of water use in agriculture and often involves aquifers that are being depleted. As potable water becomes less available in developed and developing economies, priorities for water use there may preclude biofuels.
The use of scarce water supplies to grow corn for ethanol must be strongly questioned. Water is becoming the most critical natural resource for food production and we could end up with a biofuel industry that is taking water from food production…To mitigate water resource impact, perhaps the next energy policy act should also insist on a water footprint analysis of all biofuels.

As of July 2008, biofuel production in the US had reached 34 billion liters exceeding the mandated 32 billion liters under the Energy Independence and Security Act (EISA).Â  Previous studies on ethanol’s water dependence showedÂ  field-to-pump water use of 1 L of ethanol to be between 263 and 784, but according to the new study from the University of Minnesota, this fails to take into account differences in regional irrigation practices for growing bioethanol crops.Â  In the new study, researchers discovered the embodied water in ethanol (EWe) varied greatly from state to state as measured by liters of water per liter of ethanol (L L?1). Yi-Wen Chiu, Brian Walseth and Sangwon Suh of the Water Resources Science and Department of Bioproducts and Biosystems Engineering write:

The results show that there is a wide variation in EWe between states ranging from 5 to 2138 L L?1. As a general trend, the EWe increases from the East to the West and from the Midwest to the Southwest regions of the U.S. (Figure 2). Among the 19 ethanol-producing states in 2007, Ohio shows the lowest EWe of 5 L L?1, whereas California has the highest EWe of 2138…Our results also show that a considerable volume of groundwater was withdrawn for bioethanol in the regions with vulnerable fossil aquifers.

The authors suggest ethanol production should be concentrated in regions with lower irrigation rates to lessen its impact on groundwater supplies. As more of the country faces drought conditions, this will be especially important to consider when converting land to biofuel crops.