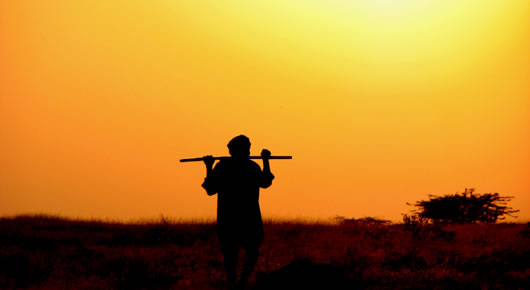 In one of the more tragic stories related to water shortage in recent history, some 1,500 farmers in India’s agricultural state of Chhattisgarh committed mass suicide in response to the devastating effects of water shortages on their crop production.

The story, reported here by The Belfast Telegraph and The Independent, underscores the potentially devastating effects of water shortages to agriculture-centric regions of the globe, and to those who rely on water for not only their financial livelihoods and health, but for their hope.

said Shatrughan Sahu, a villager local from a Chhattisgarh district, to India’s Down To Earth magazine. The district has been particularly devastated by farmer suicides in recent years, having recorded 206 in the past year alone. District police records indicate that many of the deaths occur due to distress over financial debt related to crop failures. In the Chhattisgarh region, water levels in the area have been reported to have been in major decline during recent years primarily due to drought, which has all but destroyed agricultural efforts in the region.

However, farmer suicides, including those committed en masse, have a tragic history in India beyond Chhattisgarh state itself. According to the statistics of National Crime Records Bureau, some 200,000 farmers have committed suicide during the past 12 years. The BBC, citing another government report, reported in 2007 that â€œabout 12 per cent of marginal and small farmers have left farmingâ€ during the past several years.

India is by no means the only region experiencing such dramatic levels of drought and resulting threat to agricultural production and farmer livelihood. For example, some Australian farmers are experiencing similar financial hardships as a result of water shortages due to drought, and which are exacerbated by loan conditions that make it difficult for farmers to manage their debt. Many believe that though such regions today serve as flashpoints for the water crisis, they are actually harbingers of problems destined to face many other regions of the globe in coming years.

Though for different reasons related to genetically modified crops, farmer suicides in India have been in the international news spotlight before, and become a cause championed by Prince Charles. The situation related to GM crops, which involves Monsanto, has garnered such international attention that Monsanto even chose to make a public statement addressing the issue on their newly launched corporate blog.

In addition to putting a sobering exclamation point on the present state of global water availability, the story also serves as further reminder of how farmers and agricultural nations stand at the forefront of the world water crisis and are presently suffering the most immediate and dramatic of its effects. Recent documentary films such as Sam Bozzo’s indy water documentary Blue Gold: World Water Wars and Irena Salina’s FLOW include stories of the plight of farmers in relation to drought, regional politics, and economically-driven multinational water interests.