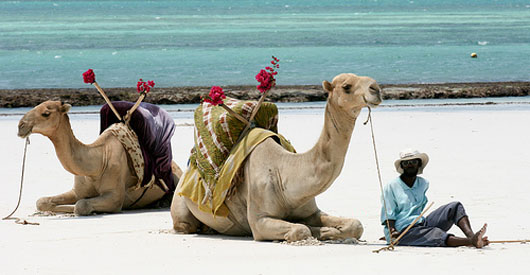 Often well intentioned international aid has the opposite effect on impoverished nations that rely heavily on their ecosystems for survival.Â  Take for example poor fisherman in Diani Beach, Kenya who used USAID money to buy nylon fishing nets that are entangling marine life and damaging coral reefs off Africa’s most popular beach.Â  Fisherman are resistant to cutting the nets to save whales and turtles since they cannot afford to replace them, and nylon nets are difficult to repair.

USAID is an acronym for the United States Agency for International Development:

U.S. foreign assistance has always had the twofold purpose of furthering America’s foreign policy interests in expanding democracy and free markets while improving the lives of the citizens of the developing world. Spending less than one-half of 1 percent of the federal budget, USAID works around the world to achieve these goals.

USAID’s history goes back to the Marshall Plan reconstruction of Europe after World War Two and the Truman Administration’s Point Four Program. In 1961, the Foreign Assistance Act was signed into law and USAID was created by executive order.

Since that time, USAID has been the principal U.S. agency to extend assistance to countries recovering from disaster, trying to escape poverty, and engaging in democratic reforms.

In Diani Beach, fisherman have traditionally used used hooks and hand lines to catch fish they sold to tourists at nearby hotels. The supply of fish has been shrinking as the human population grows, so fisherman have turned to plastic nets.Â  In 2003, USAID began a $575,000 four-year project to supply fisherman with freezers, boats, and nets; however, the nets are destroying the very marine life that attracts tourists to the region.Â  Daniel Floren, who runs a local diving school, explains, “Without the reefs, there will be no diving. If we have nothing to show, I’ll have to shut up shop.”

USAID has admitted they did not foresee the consequences of the nylon nets on the local ecosystem and economy of Diani Beach. According to Robert Buzzard, a USAID official:

There weren’t environmental assessments year on year…Those concerns are valid…this project is finished … Every project we do, we learn from.

Diani Beach fisherman did not request the plastic nets the US purchased for them. Instead, they wanted the type of nets or long fishing lines that do not entangle other marine life.Â  In just two months, over 70 turtles were snarled by the USAID nets.Â  Furthermore, stones used to weigh down the nylon nets scrape over delicate coral damaging the reefs.Â  The nets are made of nylon that will remain in the sea for a long time causing further damage to marine life after they are no longer useful to fisherman.