You are here: Home / Blue Energy / Venice to Use Algae in Canals for Emissions-Free Power by 2011 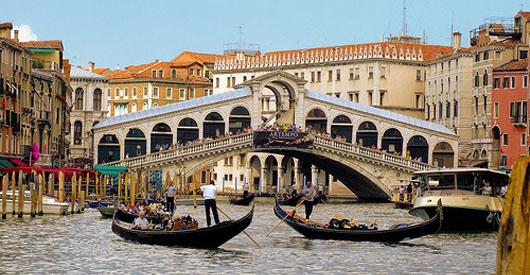 
Nicknamed the “City of Water”, Venice, Italy is world famous for its canals. In fact, the city is practically a “no car zone” since it is built upon water.Â Unfortunately, this water is plagued by algae (Sargassum muticum and Undaria pinnatifida) that was brought to the seaport from Japan, China, Korea, and France.Â The algae poses problems for Venice’s famous gondolas and ferry boats, but now the city is looking at a unique solution to the problem:Â  convert the algae into energy!

Undaria pinnatifida, also known as Asian kelp, nevertheless figures on the Global Invasive Species Database of 100 least wanted guests, which notes that it “forms dense forests, resulting in competition for light and space, which may lead to the exclusion or displacement of native plant and animal species”. Since it can grow to up to 3 metres (about 10ft) in length, it also has a formidable potential to foul the propellers of boats operating in the lagoon.

Italy has announced a unique approach to the algae problem by investing 200 million euro in a project to harvest the seaweed from Venice’s canals and turn it into emission-free energy.Â  EcoWorldy reports:

The plant, to be built in collaboration with renewable energy services company Enalg, will be operative in two years and will produce 40 megawatts of electricity, equivalent to half of the energy required by the entire city centre of Venice.

The algae will be cultivated in laboratories and put in plastic cylinders where water, carbon dioxide, and sunshine can trigger photosynthesis. The resulting biomass will be treated further to produce a fuel to turn turbines. The carbon dioxide produced in the process will be fed back to the algae, resulting in zero emissions from the plant.

The goal is to make Venice completely self-sufficient for its energy needs, as well as reduce carbon emissions. Ocean biomass production could be the future for supplying the energy needs of many port cities around the world.