You are here: Home / Blue Energy / Wave Energy Farm To Be Developed Off The San Francisco Coast 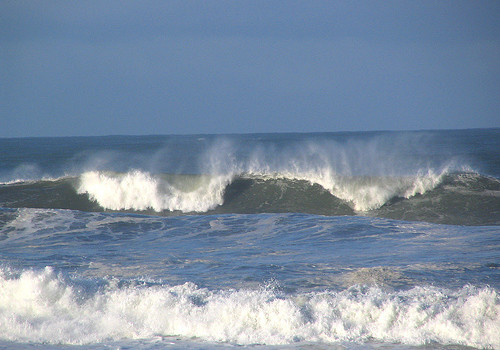 The San Francisco Bay Area looks like it could be home to USA’s first major Ocean Wave Energy farm.

On the heels of President Obama’s commitment to developing a renewable energy economy, San Francisco Mayor Gavin Newsom, announced a preliminary permit application sent to the federal government for a wave power project off the coast of California. The project promises to bring wave energy and jobs to the Bay Area.

Wave Energy – How Does It Work?

When winds blow over the ocean with a degree of consistency and force, they produce intense ocean waves on a regular basis. Wave power devices such as the Pelamis wave energy converter, extract energy directly from the surface motion of the waves or from pressure fluctuations below the surface.

The Pelamis wave energy converter resembles a huge “sea snake” in the water. It is a series of long, cylindrical tubes that are hinged at its joints. The converter generates power in the joints connecting its tube sections. As ocean waves jostle the joints up, down and side-to-side, hydraulic rams drive an electric generator. The electricity is then carried to shore via a sub-sea cable.

Coastlines in the northern and temperate zones of the planet are ideally suited to capture wave energy thanks to prevailing winds known as westerlies . Ocean wave energy projects have already been funded in Europe and Australia.Â  In fact the worldâ€™s first commercial wave energy farm was launched in 2008 at the AguÃ§adora Wave Park off Portugalâ€™s northern coast. The Northern California coastline provides perfect geographical circumstances for wave energy farms: the westerlies (which blow strongest in winter) create intense waves that that crash against Pacific shores.

The City of San Francisco has filed an application for a wave power farm that could produce up to 30 megawatts of power.. Mayor Gavin Newsom is 100% committed to the development of the proposed wave farm off of Ocean Beach in San Francisco.

“Ocean power is a true â€œgame changerâ€ in the area of renewable energy.” says the Mayor. “When wave and tidal power technologies reach commercial scale, they are expected to be able to provide thousands of megawatts of power to our coastal communities, dramatically green our energy portfolios and create thousands of new American jobs. In San Francisco, weâ€™ve been doing our part to spur these technologies by aggressively advancing tidal and wave power pilot projects. “

Unlike the AguÃ§adora Wave Park in Portugal which operates solely on Pelamis converters, the city of San Francisco will explore over 50 different types of wave devices currently under development, ranging from â€œpitchingâ€ devices (Pelamis), â€œovertoppingâ€ devices (Wave Dragon), oscillating water columns (OceanLinx) and â€œheavingâ€ devices (Aquabuoy) to determine what will work best for San Franciscoâ€™s waters.